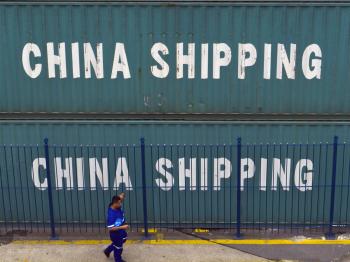 A port employee walks next to containers coming from China and waiting to be loaded to return with Brazilian goods, in Rio de Janeiro's port on February 6, 2009. (Antonio Scorza/AFP/Getty Images)
China

Andy Thomas
View profile
Follow
biggersmaller
Print
China’s dependency upon the major world economies took a major jump this week, as it officially became the largest exporter in the world—edging out Germany.

China’s customs agency, the General Administration of Customs (GAC), announced Sunday the total exports for 2009 to be at a value of $1.2 trillion, edging out Germany with a total export value of $1.17 trillion.

Despite the growth in exports, China trade surplus fell 34.2 percent in 2009, from the prior year indicating a significant drop in imports.

"The prospect that China will overtake Germany to become top global exporter only means that China has indeed become a large trading country in terms of exporting scale," said Zhao Jinping, a researcher with the Development Research Center of the state Council.

“But in terms of the structure of exports, technological innovation and industry competitiveness, China is far from being eligible for the title of 'trade power'," he told Xinhua.

The vice minister of commerce was equally critical of the strength of China as a major trade partner.

"China should adjust the product structure and transform its growth pattern," said Zhong Shan, vice minister of commerce, as reported by the Communist regime’s official mouthpiece.

Yet economic analysts outside of China find the critical remarks by Chinese officials and analysts reported by Xinhua—the regime’s state mouthpiece—to be an effort to downplay the news and distract attention from potential pressure to unpin the Yuan—China’s currency.

“The [regime] is still very much reliant upon the artificial exchange rate and they don’t want to draw too much attention,” said John Li, a former official for the Chinese Ministry of Commerce.

“China is not helping to dissolve the ongoing global economic crisis, because if China is playing a constructive role as promised by Chinese leaders at the G20 meeting, it should upgrade it exchange rate against major industrialize countries. That would in turn increase purchasing power of Chinese consumers as well as Chinese firms,” said Li, now an associate professor of Business and Economics at Hunter College/CUNY in New York.

“So the decrease in imports indicates China is only trying get as much share in a much-decreased pie of the world economy,” he added.

In addition to the hot button issue of artificial exchange rate, China has dramatically increased investment and lending within the real estate market driving up home values as much as 60 percent.

It was also reported that the housing bubble had grown so significantly that the regime had put out a policy on Sunday to prevent speculative measures by homebuyers within the real estate industry.

“China has invested $800 billion into their economy that further in turn drove the GDP. It is estimated that one-fourth of China’s GDP came from real estate development," Li said.