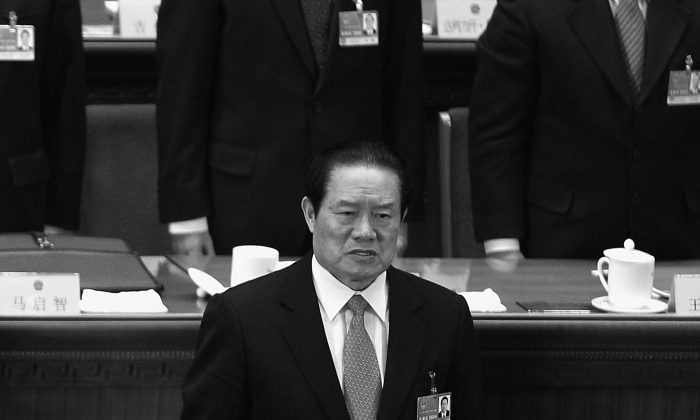 China’s communist authorities seem to have begun, through well-timed leaks to state-controlled media, preparing the ground for their public case against Zhou Yongkang, the formerly powerful chief of the Party’s sprawling security apparatus.

Zhou’s fall from grace was speculated about long before it was publicly acknowledged by the Communist Party on July 29, the day before the birthday of the People’s Liberation Army. The formal charges against him are “serious disciplinary violations,” a common euphemism for corruption—though political analysts share a consensus that such a charge is likely only a fraction of what Zhou is guilty of.

In particular, it is uncommon for Party authorities to go after retired members of the Politburo Standing Committee, the small circle of men that make the most important decisions in China, indicating that Zhou’s political mistakes must be grave indeed.

Foremost among these is his likely involvement, together with another felled Politburo member, Bo Xilai, in an attempt to spring a political coup on Xi Jinping, who assumed the Party leadership in late 2012.

None of that will show up in the official trial, though.

Instead, state-run media are dropping hints about financial corruption that Zhou was involved in, and it is this patchwork of claims that will most likely form the basis of his public prosecution.

Time Weekly, an official media, reported on Sept. 2 that the authorities were in the process of verifying the precise amount that Zhou is suspected of embezzling, “but that the materials required for a public prosecution are being prepared.”

A particular case involving PetroChina, Zhou’s former stomping ground, is cited: embezzlement in just that one case involves over 102 billion yuan ($16.6 billion), the report says. The amount is 10 percent of the total annual profit of the 113 central-level enterprises under the State-owned Assets Supervision and Administration Commission (SASAC) in 2013.

An inside source, close to PetroChina and Sinopec, told Times Weekly that a number of mid-level officials in the two systems have fled to Canada, the United States, United Arab Emirates and elsewhere, before anti-corruption investigators could get to them.

Earlier this March, Reuters reported that Chinese authorities seized $14.5 billion in assets from Zhou and his family from both domestic and overseas bank accounts, as well as real estate, quoting leaks from two sources briefed on the investigation.

Given the punishments that unauthorized leakers can be expected to be dealt in China, it is likely that Party propaganda authorities were also making use of Western media to get the word out, part of making the final trial against Zhou more credible.

The sources said that authorities confiscated around 300 apartments and villas, worth around 1.7 billion yuan, as well as antiques and paintings worth 1 billion yuan. Then there were the over 60 vehicles.

In March, too, the same month the Reuters report emerged, a list of evidence seized from Zhou and his family’s houses was leaked online.

Apart from the run-of-the-mill objets d’art, police also seized 27 guns and over 11,000 bullets of various calibers, the list says. The list was widely circulated on Chinese-language media inside and outside China, though the authorities have given no official response.

Since the anti-corruption campaign began in China, a large number of officials associated with Zhou Yongkang have, one after another, met their political demise. This includes 30 officials occupying relatively high positions in the industries that Zhou has operated and established political influence in. In the petroleum industry, at least 10 high ranking officials have been taken down, and many others in the security apparatus, the state asset commission, and in Sichuan Province, have also been dealt with.