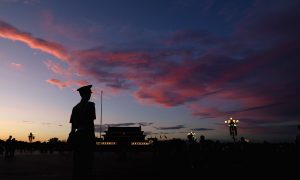 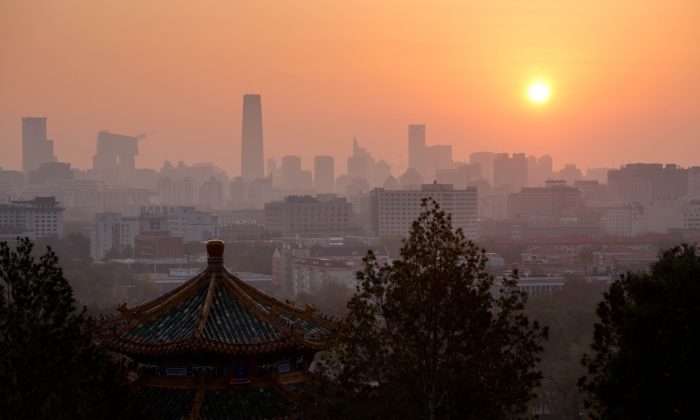 The sun rises above the Beijing skyline early on Nov. 6, 2012. The Chinese Communist Party will collapse in three stages in the next three years and its reign will come to an end by 2016, according to the Hong Kong magazine Frontline. (Ed Jones/AFP/Getty Images)
China

China and Party Will Collapse by 2016, Says Hong Kong Media

The Chinese Communist Party will collapse in three stages in the next three years and its reign will come to an end by 2016, according to the Hong Kong magazine Frontline, which focuses on Chinese politics.

According to Frontline, the first to go will be China’s economy, in 2014; in 2015 the “political structure” of the Party will be destroyed; and in 2016, the entire society will fall apart, the article says, citing historical precedents. With a big enough trigger, the collapse could arrive earlier, it said.

Economists are seeing a reverse in global capital flows—money is moving out of China—which may trigger financial upheaval, Frontline said.

Among all the threats, the most lethal three are the real estate bubble, shadow banking, and local government debts, because of how pervasive and large-scale they are, says Dr. Frank Tian Xie, a business professor at the University of South Carolina Aiken.

China will see negative investment growth next year and monetary injections into the system won’t improve the situation but are still necessary for maintaining the chain of local debt, according to the report.

According to the article, the Chinese economy’s crisis originates from political problems that will make themselves apparent in a 2015 collapse. Many complex vested interest groups in China disregard the fate of the Party or the nation and are only concentrated on accumulating wealth, Frontline said.

According to the Hong Kong report, these vested interest groups are more willing to see the end of the Chinese Communist Party than follow the reforms suggested by Xi Jinping and other current top leaders, because they have prepared their own exit strategies.

As a last resort to save itself, the Party may use a multinational corporation to funnel money back to China and maintain the Chinese yuan while discontinuing the use of foreign exchange savings and U.S. bonds, Frontline Magazine speculated in a June issue.

The subject of a Party collapse has been popular in the past year, with a China-centric apocalyptic novel published in January titled 2014: The Great Collapse becoming the number one bestseller in a Hong Kong store for banned books.