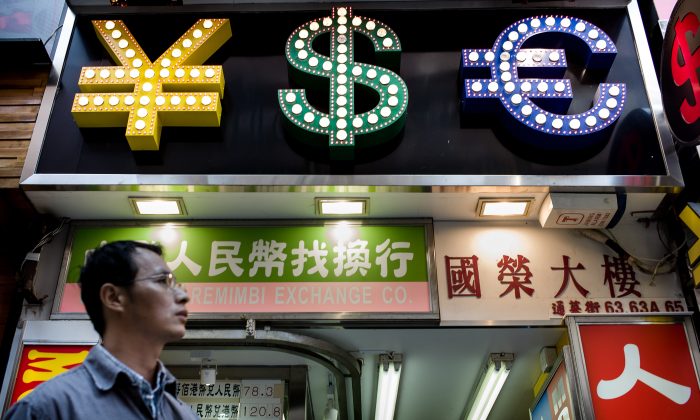 The problem with micromanaging the economy is that things become rather complicated. That’s why China needs two currencies, one for the mainland, one for international banks. Since the devaluation on August 11, it seems China is losing control of both.

The Renminbi (RMB) or yuan is used within mainland China and can be exchanged for other currencies very restrictively. It is primarily used in trade but also for tightly regulated inbound and outbound investments.

There is no real market for this exchange rate, instead the People’s Bank of China (PBOC) comes up with a fix every day and then trades around it.

“Nobody knows officially how China gets to its fixing. It’s still a black box. It says it takes prices from many banks, more than a dozen, including foreign banks,” Marc Chandler, a senior vice president and head of currency for Brown Brothers Harriman in New York told Bloomberg.

So the PBOC would “fix” the rate in the morning and then intervene in the markets to keep it from moving further than 2 percent in either direction.

This is how China acquired its massive pile of foreign exchange reserves: As it was running a trade surplus, dollars were chasing yuan to pay for the vast quantity of goods China was shipping to the United States every year.

Under normal circumstances, the yuan should have appreciated considerably, but the Chinese regime wanted to keep exports artificially competitive.

So the PBOC printed yuan to meet the demand and thereby kept the exchange rate flat from 2001-2005. After 2005, it allowed to currency to appreciate 20 percent over 10 years, which again misrepresented a true market clearing price.

In the process—because of all the money printing to buy dollars—the PBOC’s balance sheet zoomed from less than $1 trillion in 2002 to $6 trillion in 2014.  As a comparison, the Federal Reserve’s maximum balance sheet size reached in 2015 was only slightly more than $4 trillion.

Determining the price of the domestic RMB has become a bit freer since the August devaluation.

“The black box that was the yuan fix is no more. The daily midpoint is now determined by the [previous closing rate]—as evident in the narrowing of the gap between the actual spot rate and the daily fix from over 0.08 percent to virtually zero,” NN Investment Partners wrote in a note.

While it is true the difference between the market rate and the fixing rate has narrowed, the 2 percent bandwidth still exists and the PBOC “fixed” the price as it pleased during the last couple of weeks as well.

The reason for the shift in dynamics are massive capital outflows, which could reach $1.2 trillion according to SocieteGenerale’s worst case estimate.

In comes the other currency: the offshore yuan or CNH, the subject of heavy intervention on Sept. 10, 2015.

It started 2004 in Hong Kong and allows Chinese banks in select trading centers to create deposits in CNH, also for foreigners. What happens then is almost completely up to the market. The point of the CNH was to have international clearing and trading without having some of the side effects influencing trade.

China’s $3 Trillion in Foreign Reserves: A Blessing or Curse?

“There are few restrictions on CNH account opening in Hong Kong. As such, the CNH market has a completely separate set of demand and supply conditions from the onshore RMB,” states HSBC. As of 2013, there were 1.5 trillion in CNH deposits, mostly in Hong Kong, only $234 billion at the current exchange rate.

Under certain—also very restricted—conditions, the CNH can be exchanged for onshore RMB, which is why the rates track each other closely.

Ever since capital outflows from China started in earnest at the end of 2014, the RMB has mostly traded at the lower bounds of the PBOC fixing (meaning a higher dollar) and the CNH has traded even lower than that because it’s much easier to get the money out of Hong Kong than it is to get it out of mainland China.

For example, while the onshore RMB hit its lowest point after the devaluation on Aug. 26 at 6.41, the CNH traded at 6.49.

This is probably why the PBOC decided to take on the offshore market by driving the CNH higher against the dollar and closing the spread to the RMB on Sept. 10.

“There’s been rumors before of state entities acting on behalf of the central bank offshore. It shows that policymakers are unwilling to relax control of key variables that now include the offshore currency,” Mark Williams, an economist at Capital Economics in London told Reuters.

As a result, the difference in the two currencies shrank from 1.4 percent on Sept. 9 to 0.4 percent on Sept. 10. And while the PBOC certainly succeeded in its objective on Sept. 10 and managed to scare away a few speculators, it is only a brief victory in the long battle of China against the market.