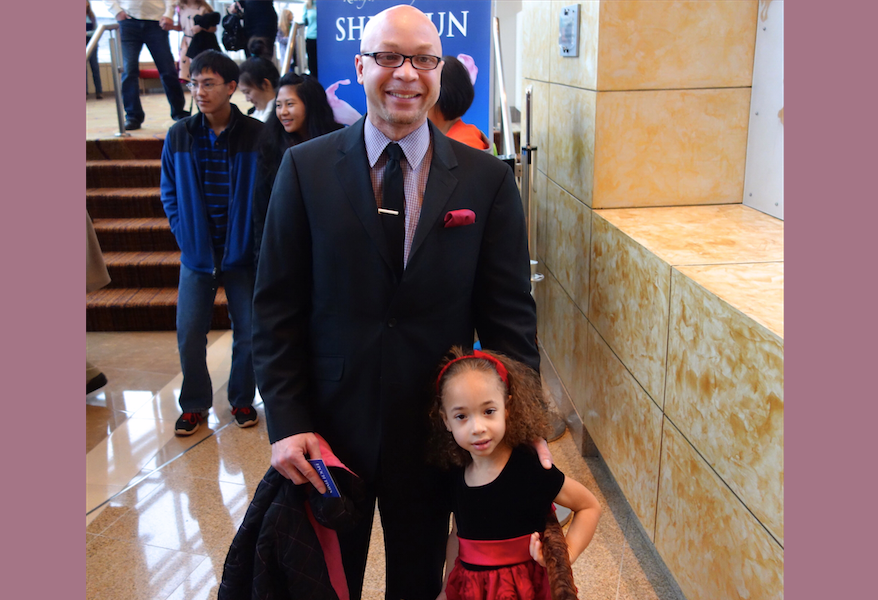 Child Wants to See Shen Yun Twice in One Day

ATLANTA—Mr. Robert Easterling brought his little daughter to see the matinee of Shen Yun on December 28. Afterward, he took her picture in front of a Shen Yun banner at the Cobb Energy Centre. He said she hoped to see it a second time that evening.

“Actually, she’s wanted to see this show for a couple of years, and so for Christmas we were finally able to get some tickets and bring her to come see the show,” said Mr. Easterling. “So it was a really good performance, and so she’s trying to convince us to come back to the evening show.” She looked on solemnly, standing at his side.

Mr. Easterling is director of quality assurance for the Integral Group. He has managed housing programs for New Orleans, Atlanta, DeKalb County, and others.

He said he was glad Shen Yun is so good for children. “It was phenomenal, the performances themselves, and the stories behind the performances,” he said. “It’s not something you really get a chance to experience every day, and so that’s why we want to have her come out and see. And so it was wonderful.”

Shen Yun contains stories and legends from China’s 5,000 years of civilization. This year’s performance includes a story about the Monkey King from the classic novel Journey to the West, a folk tale about the demigod Ne Zha, and a historic story of the wicked official Qin Hui from the Song Dynasty.

As a father, Mr. Easterling said he felt pleased that the performance was educational for his child.

For each Shen Yun performance, its artists seek to educate audience members about the essence of Chinese civilization. According to the 2014 program, “Values such as compassion and loyalty, kindness and bravery, lie at the heart of traditional Chinese culture. We believe this rich heritage is a precious gift worth keeping, and worth sharing with all of you.”

Mr. Easterling said he was pleasantly surprised by the spiritual themes in the Shen Yun performance. “That was pleasant,” he said. “But that was a surprise to me.”