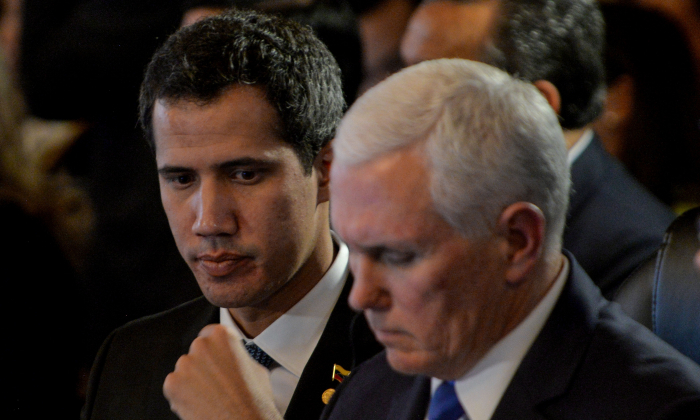 Juan Guaidó, recognized by Washington and others as Venezuela’s legitimate interim president, said on March 21 that intelligence agents had kidnapped his chief of staff in a predawn raid, signaling that socialist dictator Nicolás Maduro is turning to extreme measures to maintain control of the nation’s government.

Venezuela’s National Assembly declared Maduro a usurper early this year and elevated Guaidó to lead the nation in the interim. President Donald Trump and more than 50 nations recognize Guaidó as the legitimate ruler of Venezuela, while a handful of current and former communist regimes back Maduro.

Maduro, whose policies have led to a massive economic collapse of the once oil-rich nation, has threatened to arrest Guaidó and called him a puppet of the United States.

Guaidó said the Caracas residences of Marrero and legislator Sergio Vergara had been raided before dawn.

“They have kidnapped [Robert Marrero], my chief of staff,” Guaidó wrote on Twitter. “We do not know their whereabouts. They should be freed immediately.”

Guaidó traveled around South America in February to drum up diplomatic support for his government, defying a travel ban imposed by the pro-Maduro Supreme Court. He later entered the country via Venezuela’s principal airport without being detained by immigration officials.

Dozens of countries, including the United States, major European powers, and most South American nations, have backed Guaidó and say Maduro’s rule is illegitimate.

Venezuela is reeling from annual inflation topping 2 million percent, which has fueled malnutrition and preventable disease and spurred an exodus of more than 3 million citizens since 2015.

Maduro said his government is the victim of an “economic war” led by his political adversaries and blames U.S. financial and oil sector sanctions for the country’s situation.

Secretary of State Mike Pompeo, who has been actively involved in the pressure campaign against Maduro, condemned Marrero’s arrest.

“The United States condemns raids by Maduro’s security services and detention of Roberto Marrero, Chief of Staff to Interim President Juan Guaido,” Pompeo wrote on Twitter. “We call for his immediate release. We will hold accountable those involved.”

On March 20, Trump national security adviser John Bolton excoriated Maduro and called on Venezuelan leaders and the military to side with the people.

“Maduro’s tactics are backfiring and he is losing the small pockets of remaining support,” Bolton added. “His systematic intimidation and violence are not working. The people of Venezuela are saying no more and leaders in Venezuela have a clear choice.”

Trump has positioned Venezuela as the first domino in the downfall of socialism and communism in South America. Trump suggested that changes in Venezuela will reverberate to Nicaragua and Cuba.