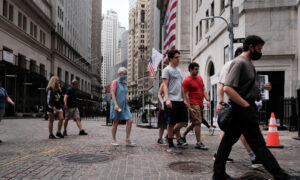 The front-nose gear of an American Eagle airplane came off the runway at O’Hare International Airport in Chicago on Wednesday.

It was headed to the gate when the skid took place.

The majority of the plane is still on the runway and the nose is on the grass.

None of the passengers were injured.

Fox reported that buses were deployed to the plane to take passengers off.