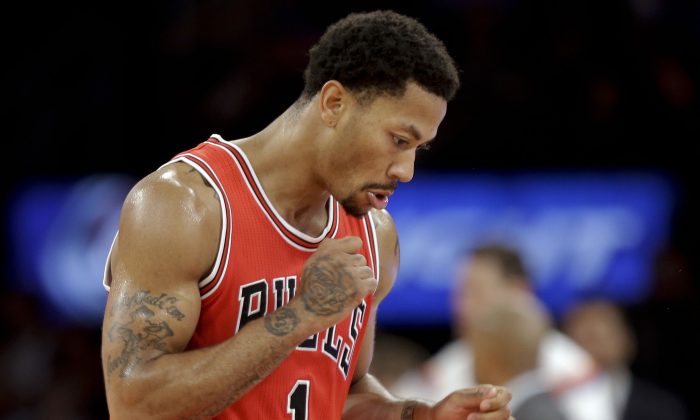 Chicago Bulls' Derrick Rose (1) reacts to a play during the second half of an NBA basketball game against the New York Knicks, Wednesday, Oct. 29, 2014, in New York. (AP Photo/Frank Franklin II)
NBA

The Chicago Bulls got another win on Saturday and are looking ahead to the coming week.

Rose Could Have Played

Derrick Rose sat out the narrow win over the Minnesota Timberwolves, but said that he could have played if needed.

“If it was a real need for me to play, I think I could’ve played but I’m just trying to be smart and trying to give it an extra day,” Rose said, “and thank God that we came out with the win.”

Bulls coach Tom Thibodeau said he wasn’t concerned with Rose’s injury and also said he had no doubt in his mind his star point guard would get back to the impact player he was before the knee issues.

As for how much the decision is his, Thibodeau said: “I just listen to what they have to say.”

The Chicago Tribune says that “they” is actually management, which the coach has been upset with since early in the preseason.

But he seemed to tone down his anger over the situation.

“The most important thing is how he feels. You can’t put somebody out there who is not comfortable to be out there. We’re not going to do that. Basically, the way we’re going to approach it is if he needs a day, we’re going to give it to him,” Thibodeau said of Rose.

“You just lock into the guys you have. Injuries are part of the game. They just didn’t start happening yesterday. I’ve been around for 24 years. I’ve had guys get hurt before. I’ve been on teams where guys have gotten through things. It’s all part of it. It’s all good.”

Taj Gibson also sat out with a sprained ankle.

Butler Vows to Remain With Bulls

“People say I’m chasing money when that’s not it. Because I’m going to be in Chicago. I say that with a smile on my face because I know that for a fact. We’ll resume (negotiations) back in July,” Butler told the Tribune.

The deadline for the extension was Friday night.

Sources said the Bulls offered him a multiyear deal that averaged $11 million a year.

Butler will now become a restricted free agent in the offseason.

“We left off (talks) on great terms — not just good, great. And our goal is still the same and that’s to win a championship,” Butler said.

“This is still home. These are still my guys. This is the team I want to be on. This is the city I want to represent. And that all comes down from the management and ownership, so a lot of respect for everybody that’s helped me through the whole process.”

MINNEAPOLIS—Jimmy Butler’s surprise return to the Chicago Bulls’ starting lineup should really come as no surprise at all.

Butler is the embodiment of the Bulls’ mind-over-matter mantra, and he returned just in time to teach No. 1 overall draft pick Andrew Wiggins a hard-to-swallow lesson.

Butler coaxed the over-aggressive Wiggins into a foul with 0.2 seconds left. Then Butler calmly knocked down two free throws to help the Bulls weather another absence from Rose in a 106-105 victory over the Minnesota Timberwolves on Saturday night.

Butler scored 24 points on 6-for-12 shooting in his season debut and Pau Gasol added 29 points and six rebounds for the Bulls, who missed Rose with a sprained left ankle.

“What a way to kick off the season,” Butler said. “I’m happy we got a dub. Wins are hard to come by, so on to the next one.”

Then Butler took the inbounds pass, stumbled to his knee, gathered himself and pump-faked to get Wiggins up in the air.

Ricky Rubio tied a career high with 17 assists in his first game since signing a four-year, $55 million contract extension. But the Wolves lost starting power forward Thaddeus Young to a strained neck on a scary collision with Butler just before halftime.

The Bulls led by 16 points in the first half, but Anthony Bennett and Martin led a Wolves comeback in the final two quarters. Martin’s big 3 came after two offensive rebounds, but Wiggins was too aggressive on Butler on the final possession.

“I could’ve changed the outcome of the game,” Wiggins said. “It was a learning experience for me. It hurt, but the good thing about the NBA, I’ve got another game in a couple days.”

Rose warmed up before the game, but the Bulls made a late decision to rest their former MVP who has missed most of the last two seasons with knee problems. Taj Gibson also missed the game with an ankle injury, but the Bulls were buoyed by Butler’s return.

The shooting guard missed the first two games of the season with a sprained left thumb that was expected to keep him out much longer, and he made five of his first six shots to get the Bulls out to a 16-point lead in the first half.

Showing no signs of disenchantment from the inability to get a new long-term extension done by the Friday deadline, Butler was a force on both ends as usual.

Butler played the entire first quarter and scored nine points while making life miserable for Wiggins on the other end. Wiggins was 0 for 3 at halftime and finished with eight points and six rebounds in 31 minutes.

“He came in in great shape, and I think that’s helped him greatly because when you do take on an injury, the conditioning’s not going to be the same during that time but because he was in great shape it allowed him to bounce back very quickly,” coach Tom Thibodeau said. “And Jimmy’s got a lot of mental toughness. He’s invaluable to us.”

New Bulls big man Pau Gasol says that his brother Marc Gasol might try to sign with the New York Knicks next offseason.

Pau declined to go to the Knicks, who were among a number of suitors for the star. But he says that it’s “possible” that Marc opts to sign an offer sheet with the Knicks and new president Phil Jackson. The Memphis Grizzlies could match the sheet since Marc will be a restricted free agent.

“It’s a personal decision. I talked to my brother enough about Phil that he knows what he brings to the table,” Pau told ESPN.

“I don’t know how much he’s involved with the team, really. He’s in an upstairs position, management position. He’s not on the court every day, so it’s something that [Marc] will consider when he gets to that point.”

“We’ll see what happens next year, what he decides,” Pau added.

“Hopefully he’ll have a strong year and all the options in the world. Because he’s one of the top centers, interior players, in the league. So any team would be fortunate to have him.”