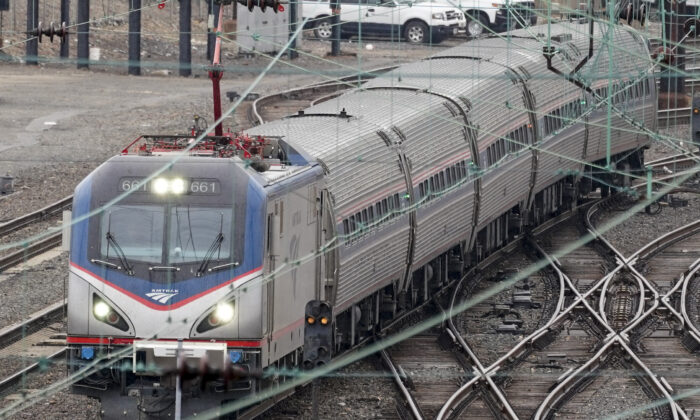 An Amtrak train from Washington crashed into a tractor-trailer in Maryland on Wednesday evening after a traffic jam left no room for the truck’s driver to leave the tracks.

There were no deaths, but the driver of a passenger pick-up truck who was caught in the collision was taken to the hospital for injuries considered not to be life threatening.

“There was nowhere for the tractor-trailer to go,” a spokesperson for the Frederick County Fire Department told Fox News. “Train struck rear passenger side of the trailer causing it to be pushed into a passenger truck. The passenger truck was then pushed into the building.”

The incident took place in Rockville, Maryland, at about 5:20 p.m. The Amtrak train was on its way to Chicago.

The train was back in service after a delay of just over an hour. Amtrak said it’s working with officials to investigate the accident.

There have been a number of serious incidents involving Amtrak trains in recent years.

In June, an Amtrak train crashed into a car at a railroad crossing in California, killing three people and seriously injuring two others.

The same month, another Amtrak train derailed in Missouri after hitting a dump truck that was on an uncontrolled public crossing. Four people died in the Missouri incident, and at least 150 people had to be treated at hospitals.

In September 2021, an Amtrak train derailed in Montana and sent several cars toppling to the sides. The train was carrying 146 passengers and 16 crew members when the derailment took place. Three passengers were killed and over 50 others suffered injuries. Seven people later filed a lawsuit, claiming Amtrak and its operator were negligent.

And in 2017, an Amtrak train derailed in DuPont, Washington, leaving three people dead and over 60 others injured. The company paid out $57 million in settlements for that incident.

Amtrak instituted a policy in 2019 which insists that legal action against the firm must be resolved through a mandatory arbitration process. If a customer purchases a ticket, the policy does not allow them to sue Amtrak for any reason.

The lawsuits stemming from the Montana incident also sought to challenge the arbitration policy.