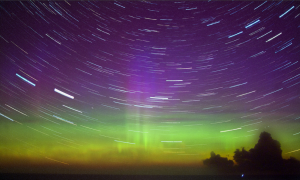 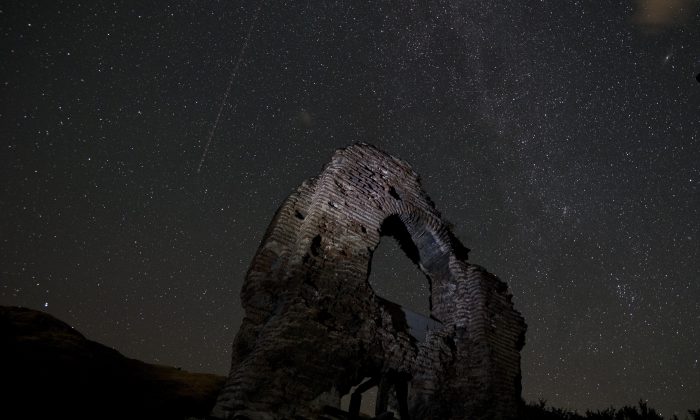 A long exposure image showing an aeroplane passing in the sky during the Perseids meteor shower over the remains of St. Ilia Roman early Christian basilica dated back to the 5th6th century AD near the town of Pirdop, early on August 12, 2015. The Perseid meteor shower occurs every year in August when the Earth passes through the debris and dust of the Swift-Tuttle comet. The Perseid meteor shower -- an annual display of natural fireworks -- should be particularly spectacular this year, with extra-dark skies expected to create optimal stargazing conditions, astronomers said on August 7, 2015. (Nikolay Doychinov/AFP/Getty Images)
Photo Gallery

Check Out These Stellar Pictures of Perseid Meteor Shower

WASHINGTON—People looking for a shooting star to wish upon may have found Wednesday overnight to be a dream come true.

Celestial timing helped people see more of the oldest meteor shower known to Earth, the Perseids, when they peaked 3 a.m. local Thursday, according to astronomers.

That’s “because the moon is almost new and there’s no moonlight to mess with the show,” said NASA meteor expert Bill Cooke. The last time the Perseids (pur-SEE’-uhdz) peaked with little moonlight was 2007.

The weather was good enough and one shooting star a minute, maybe more, was expected, said Cooke.

Clear skies were expected clear for an unusually large section of the United States, said Weather Underground meteorology director Jeff Masters. Much of the East, Midwest and far West will be almost cloudless. But the forecast wasn’t as nice for Florida, Minnesota, Wisconsin, Arizona, Utah and Idaho.

The sky show is pieces of comet Swift-Tuttle hitting Earth’s atmosphere at more than 133,000 mph and burning up. The best way to watch is to lie down and look up—no telescopes needed.

“For a lot of people, it’s a make-a-wish kind of mentality,” Kanani said. “There’s something quite romantic about a meteor shower.”.