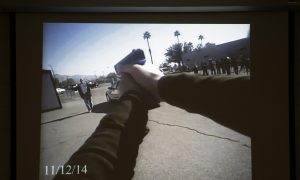 Proponents of police body-worn cameras will find some entertainment value in a series of videos uploaded to YouTube by the Seattle Police Department. The official YouTube channel of that city’s police force, dubbed “SPD BodyWorn Video,” is still in the experimental phases. All of the videos were cleared for release through public disclosure requests.

Most of the approximately 80 videos that have been uploaded have had their audio muted and images blurred to protect the privacy of the people in the videos. The videos alternate between being surprisingly funny, to shocking, to illuminating about the job of a cop.

Several videos have not been redacted, though, including a series of video clips from a January 19 protest on the streets of Seattle. According to local media reports, the protest march against police use-of-force spilled onto a highway, and 19 protesters were arrested. One police officer was injured.

At different points, the officer whose video is used can be heard telling people that they are being audio and video recorded. It’s unclear whether the videos are different clips from the same officer, but a man’s voice can be heard at one point telling officers to turn on their video. Not long after that police start to pepper spray toward the crowd.

In one clip, protesters can be heard making snide comments as police ride by on their bicycles, sometimes bumping into them.

“That’s assault, brother!” yells one man to the police, borrowing the phrasing and cadence from a well-known Adam Sandler movie.

Other clips show a close-up view of arrests and altercations with people on the street, including one man being tackled to the ground and handcuffed.

“I’m having trouble breathing, sir,” the man can be heard saying politely at least twice as he lays face down on the pavement.

In another scene, police ride their bicycles to a staging area with a barricade between them and protesters, then discussing the possibility that they could get trapped if people decide to push the barricades over.

Even though there isn’t a wide variety of unredacted videos posted yet, what is up shows—from the perspective of police—what their job can be like.

Twelve officers from the Seattle Police Department’s body-worn camera pilot program were formally approved on December 14, 2014. But legislative debates over privacy and legal issues could stall full implementation of the program in any form until 2016 or later.