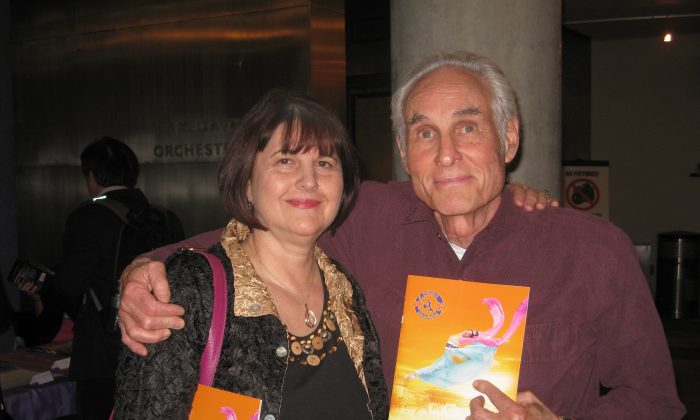 MESA, Ariz.—Shen Yun “represents the international bid to bring people together under the understanding that we’re all from one source,” said Robert Martindell, a marketing director for Papa John’s Pizza.

Rev. Spang-Martindell is a chaplain and provides services in spiritual care and counseling. She enjoyed the spirituality of traditional Chinese culture portrayed in Shen Yun.

“I love the freedom of expression of spiritual awareness,” she said. “I do appreciate this part of the show.”

Her husband added, “As magnificent as the way it had been expressed—verbally and non-verbally—I would strongly recommend everybody come to see this magnificent and awe-inspiring group of dancers and performers and singers.”

The enthusiasm among the audience was apparent, as cheers were heard throughout the performance, and the audience stood in ovation as the performers waved to them during the curtain call.

Shen Yun is a non-profit, New York-based, classical Chinese music and dance company that seeks to revive the beauty of traditional Chinese culture.

Through approximately 20 vignettes, audiences are invited to take a journey through 5,000 years of Chinese civilization that includes myths, legends, and modern stories of courage where “mortals and divine beings merge on stage as one,” according to Shen Yun’s website.

“Principles such as benevolence and justice, propriety and wisdom, respect for the heavens, and divine retribution, all come to life, washing over the audience. Originating from Confucianism, Buddhism, and Taoism, these ideals are the essence of traditional Chinese culture,” says the website.

Mr. Martindell said it’s important for people of different cultures and faiths to honor others’ spirituality and belief in the Creator.

Rev. Spang-Martindell especially enjoyed the depiction, in the final piece, of the Creator descending to earth to save humanity.

“I appreciated that divine aspect coming into physical form from the screen down onto the stage. That’s very powerful. And then all the dancers bowing to the divine. [Those are] values that I hold in my daily life,” she said.

Rev. Spang-Martindell was referring to one of the major features in each Shen Yun performance: digital, animated backdrops that provide the setting for each piece, whether it be vast, green Mongolian grasslands; magnificent Himalayan peaks; or even colorful celestial kingdoms. They infinitely expand the stage and are “magical windows to completely different realms,” says the company website.

Ancient tales really do come to life as dancers leap from the back of the stage and suddenly appear as animated characters in the backdrop, where they can fly about, only to reappear moments later in physical form on stage.

“I’ve never seen anything like it,” said Rev. Spang-Martindell. “I just enjoyed it so much.”

Another aspect of Shen Yun that she appreciated was the variety of richly colored costumes.

“Overall, I love all the color combinations because that really affected how I felt,” she said.

“Every costume in a Shen Yun performance is presented with brilliant colors, displaying a splendid spectacle,” says Shen Yun’s website. “Their objective is an authentic presentation of the attire that comes from China’s divinely inspired traditional culture, and a consummate stage effect.”

Rev. Spang-Martindell added that she supports Shen Yun and its mission and encourages the company to continue freely expressing spiritual values.

Mr. Martindell added, “It has been a joy and privilege to be here tonight with all of these wonderful, beautiful people.”