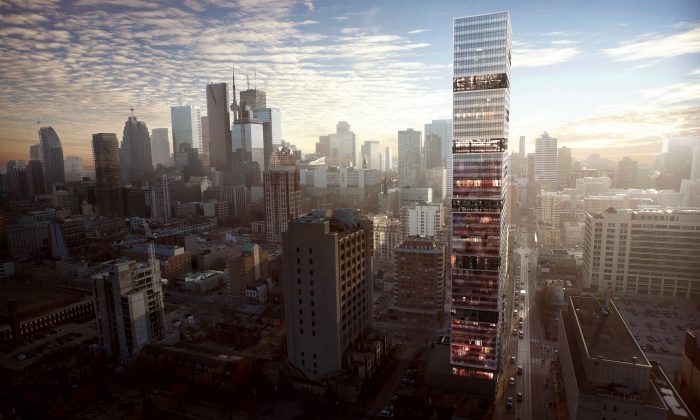 CentreCourt Developments is gearing up to launch its next project, a high-rise condo at 411 Church St., a block north of Carlton Street and across the road from Maple Leaf Gardens.

The development is in the midst of a re-zoning process at present, so design details are still to be formally determined (Page + Steele / IBI Group Architects is on the case, with an assist from Strybos Barron King landscape architects).

One thing CentreCourt’s newly minted president Shamez Virani can say for certain, however, is that the 411 Church project will continue building on momentum the company helped create with its two other projects in Toronto’s rapidly revitalizing Downtown East: Core Condos and Grid Condos.

As well they should be. After all, Core Condos, a 221-unit, 26-storey tower at Church and Shuter Streets, sold out just days after launching in January 2014—typically the slowest time of year. It was under construction six months later. “We weren’t sure how it would be received,” Virani says, “so we were blown away by the response.”

Buoyed by that success, CentreCourt followed up last summer with the launch of Grid Condos, at Dundas and Jarvis. It sold out within six weeks. The developer subsequently got approval to add three more storeys to the now 50-storey, 563-unit tower, and Virani notes those units got snapped up in a matter of weeks, too.

“The price appreciation we’ve seen in the nine months since we launched has been incredible,” he says, referring to subsequent developments that have launched in the vicinity. “Prices are on the rise city-wide, but the east quadrant of downtown—from Yonge to Jarvis and Queen to Bloor—is likely the strongest performing sub-market at the moment on a percentage-appreciation basis.”

Once an area to steer clear of, Downtown East has been attracting loads of developer attention of late. CentreCourt’s Grid Condos, which begins construction this summer, will share the Dundas and Jarvis intersection with Great Gulf’s recently completed Pace Condos, and Gupta Group’s Dundas Square Gardens, also starting construction this summer.

Over on Church Street, Menkes is building 365 Church; across McGill Street from that, Tridel is under way on its Alter condo. Up the street and adjacent to CentreCourt’s proposed tower at 411 Church, Tribute Communities is planning The Stanley, a 37-storey building. And across the road from Core Condos on Shuter Street, St. Thomas Developments has launched 88 North, the first phase of a master-planned development that will fill one of downtown’s biggest remaining surface parking lots with condos, retail, parks and a hotel.

“Everyone’s opening their eyes to Downtown East at the same time,” says Virani, noting that the desperate demand for Ryerson University student accommodation, plus the area’s proximity to Yonge Street and great transit service, undergird its appeal. “There was once a stigma; now everyone realizes this is a great neighbourhood with growing potential.”

It’s been an action-packed past five years for CentreCourt, which culminated in Virani being named president of the company earlier this year. He’s serving alongside CEO Andrew Hoffman, who launched the company in 2010 with its maiden project Peter Street Condos.

CentreCourt’s previous developments INDX and Karma, Toronto’s top-selling condos of 2011 and 2012 respectively, are set to be completed this summer. “It’ll be exciting to see those 1,300 units come to life,” Virani says.

And the team is actively pursuing new opportunities, including partnering with other builders on larger-scale mixed-use downtown projects, not just purely condo buildings.

“We’re bullish on the Toronto market,” says Virani. “Downtown is like a snowball — it continues to grow and grow, and now it’s achieved critical mass and there’s continued depth of demand and more and more cultural amenities.

“We think everything that has made downtown great will continue to make it better into the future.”