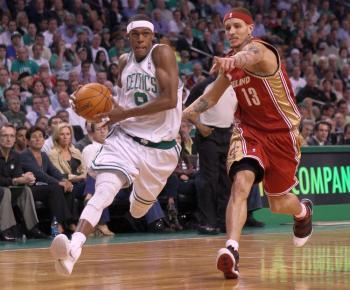 Celtics Use Teamwork to Eliminate Cavaliers

By Susan Shan
Print
At the end of the day, the biggest story will be how LeBron James had a triple-double despite playing poorly and without much help from his supporting cast in the second half.

On Thursday night, it was the Boston Celtics who played like a real team as they closed out the series in six games against the Cleveland Cavaliers 94–85 at the TD Garden in Boston.

All eyes were on James, as everyone wondered how he would respond after a lackluster performance in Game 5. The MVP finished with 27 points, 19 rebounds, and 10 assists but only shot 8–21 from the field in a less than stellar effort. He committed nine turnovers.

Instead of driving to the basket, James too often settled for jumpers, and when he did drive, he failed to finish strong and missed easy layups.

Kevin Garnett, the Celtics leading scorer with 22 points, said: “We know the team was fueled by one guy, and he has a hell of a supporting cast. We know that if we could somehow, some way control the supporting cast, we had a good chance of beating this team.”

The supporting cast included Mo Williams, who single-handedly kept Cleveland in the game with 20 points in the first half, especially as James struggled offensively with only 12 points.

However, Boston coach Doc Rivers made Williams a focal point in his halftime adjustments.

Williams only scored two points in the second half.

“We guarded him better,” Rivers said.

Even though James may hold the title of MVP, Celtics fans know that the true MVP of the series was point guard Rajon Rondo. Rondo was sensational once again with 21 points, 12 assists, and 5 steals.

“You have to understand, chemistry is a hard thing to come by. All year, we’ve been dealing with chemistry problems. Rondo is getting better, and we’re fitting him in,” said Garnett. “At some time, he’s going to take this team over, and that will be a big adjustment for him, but he’s a great addition to our team.”

“I think the chemistry is starting to be sound now, and we’re playing firm basketball,” he added.

Game 6 had many implications for the future for both teams. The Celtics now face the sizzling and dominating Orlando Magic in the Eastern Conference Finals in what is probably Boston’s last push for an NBA title. Ray Allen will be a free agent after the season, and the Celtics are aging quickly.

As for the Cavs, coach Mike Brown will almost certainly be fired as the debate heats up on whether James played his last game in a Cavaliers uniform.