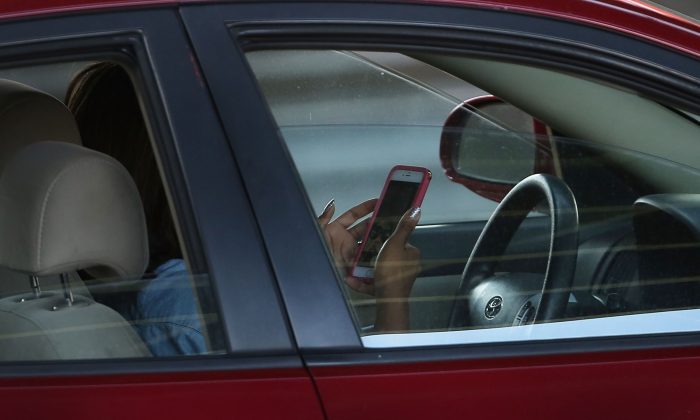 A driver uses a phone while behind the wheel of a car in New York City on April 30, 2016. (Photo by Spencer Platt/Getty Images)
Southern California

California has more drivers using cell phones while behind the wheel in 2018 than 2017, a survey released on Jan. 28 indicates.

The observational study was conducted last August and September by the California Office of Traffic Safety (OTS) and California State University, Fresno. Observers recorded the use of cell phone at 204 intersections across 17 counties in California.

The result shows that 4.52 percent of drivers were observed “picking up and using their cell phones” in comparison to 3.58 percent in 2017, according to a news release from OTS.

“Our goal is to end distracted driving, and there’s still work to be done,” OTS Director Rhonda Craft said. “This observational survey gives us an idea on where we stand getting drivers’ attention away from their phones and where we still have work to do.”

Although the increase in cell phone use caused some concern among officials, the numbers in 2018 actually dropped from 7.6 percent in 2016.

In 2017, California started banning any hand-held use of cell phones while driving, with drivers only allowed to use their phone with a single touch, like a swipe or a tap, to activate or deactivate a function. The phones also need to be mounted on the dashboard, windshield or center console.

In addition, the survey revealed several other key findings, including:

• Cell phone use was more than 8 times higher (5.55 percent) among drivers with no passengers versus with at least one passenger (less than one percent).

• Cell phone use was higher on local roads than on freeways or highways.

• The most common cell phone use by drivers was to perform a function on the phone. This could be anything from texting, email, GPS, using an app or social media.

• Less than two percent of drivers were observed using their phone with a child passenger.

“Social norms are changing when it comes to distracted driving,” Craft said. “When a driver’s perception of risk changes for certain behaviors like using their phone and driving, they are less likely to do something that can get them in trouble or worse, in a crash.”

A video from the Epoch Times shows a Scotland driver steering his truck with one hand and using another hand to operate on his cell phone mounted on the dashboard. Within about 18 seconds, he plowed into a car to his front.

The victim in the front car died weeks later in a hospital as a result of their injuries.

The driver, 34-year-old David Shields, was sentenced to five years in prison in September 2018. He was also banned from driving for seven and a half years.

“This tragic and entirely avoidable crash clearly demonstrates the fatal consequences, which can occur when a driver allows themselves to be distracted by another device whether handheld or otherwise,” Sgt. Paul Dodds of Dumfries Police said a statement.