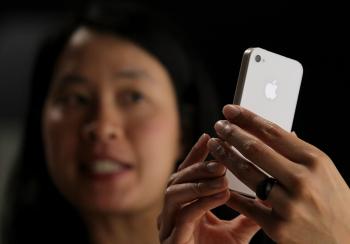 An Apple employee demonstrates the new iPhone 4 at the 2010 Apple World Wide Developers conference June 7, 2010 in San Francisco, California. Apple CEO Steve Jobs kicked off their annual WWDC with the announcement of the new iPhone 4. (Justin Sullivan/Getty Images)
US

By Ian Ritz
biggersmaller
Print
Cell phone radiation notices will have to be placed on phones now by cellular retailers in San Francisco due to the passage of a new law. The Bay Area city is the first to make such a requirement.

Different cell phones currently on the market in the United States emit varied levels of RF energy, also referred to as radio waves, when they are used during calls.

The level of the energy emitted will be have to be displayed with cell phones for sale in San Francisco. The displays will inform buyers of the level of potentially harmful RF energy that is produced by each hand-held device, reported Live Science.

Tony Winnicker, a spokesman for San Francisco Mayor Gavin Newsom, commented on the issue earlier in the week to The Associated Press. The mayor’s office publicly praised the initiative before it was approved.

"From our perspective, this is a very reasonable and quite modest measure that will provide greater transparency and information to consumers for whom this is an area of interest or concern," said Winnicker.

The National Cancer Institute compiled a report listing facts about RF waves and their affects on cell phone users. The concern surrounding RF waves and cancer usually centers around high frequency radio waves that are known as ionizing radio waves.

Ionizing radio waves are typically emitted by x-ray machines and have been shown as a potential cancer risk. Low frequency radio waves or nonionizing are emitted by cell phones and have not been confirmed as a substantial carcinogen.

A study published in 2000 by The Journal Of American Medicine shows that cell phones are not a likely cause of brain cancer.

“Our data suggest that use of hand-held cellular telephones is not associated with risk of brain cancer, but further studies are needed to account for longer induction periods, especially for slow-growing tumors with neuronal features,” read the report.

A list of different cell phones and their recorded radio wave level has been compiled by the Environmental Working Group (EWG). The EWG has a database that includes 1,000 cell phones.

A digital online interactive database containing the list of 1,000 phones can be found at EWG's official website.