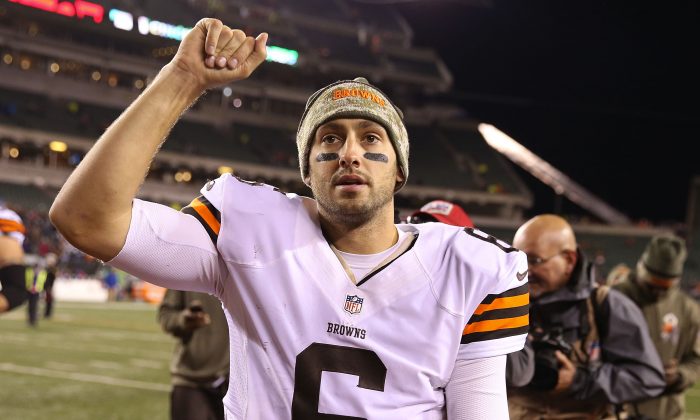 Brian Hoyer #6 of the Cleveland Browns celebrates as he walks off of the field after defeating the Cincinnati Bengals 24-3 at Paul Brown Stadium on November 6, 2014 in Cincinnati, Ohio. (Photo by Andy Lyons/Getty Images)
NFL

The Cleveland Browns have stunned most of the league by winning a lot of games and are currently first place in the AFC North.

The Browns haven’t made a contract extension offer yet, despite the 29-year-old leading the team to massive upsets this year and an overall 6-3 record, a league source told CBS.

Peter King of TheMMQB confirmed that the Browns haven’t made an offer. They made one back in May but it was quickly rejected.

Hoyer is making just $1 million this season, and his contract expires this year.

CBS says that Hoyer wants a deal similar to that of Cincinnati Bengals quarterback Andy Dalton.

“Dalton’s contract is essentially a series of one-year deals with significant flexibility for the team, but Dalton did land $12 million to sign and $17 million guaranteed, which is far more than what Hoyer could have secured before the season,” it said.

“The Browns remain very much alive for the AFC North title and face the struggling Texans and Falcons the next two weeks. Victories in those games will only further cement Hoyer’s status. It’s worth noting that Texans coach Bill O’Brien had interest in acquiring Hoyer in the past — they worked together in New England — and the Texans could very much be in the market for a quarterback in 2015. Buccaneers general manager Jason Licht was also with Hoyer in New England, and that team has had multiple failures at the quarterback position already this season.”

There have been other ideas out there. One, from NBC, says that the Browns should offer Hoyer a short-team deal that offers security but that doesn’t force them to dump Johnny Manziel.

“Two years, $18 million, fully guaranteed. With Manziel under a highly affordable contract through 2017 and the Browns holding fifth-year option for 2018, inking Hoyer through 2016 gives the Browns maximum flexibility,” it said.

“Manziel may not like it; if he doesn’t, he should commit himself to beating out Hoyer. If that happens, the Browns would be able to justify benching Hoyer, since Manziel by rule can’t get a new contract until after the 2016 season.”

General manager Ray Farmer said recently that he wants to let the season play out before offering Hoyer an extension.

Manziel Will Get His Chance

While the rumors and speculation about Hoyer’s contract continue, former Dallas Cowboys quarterback Roger Staubach came forward this week and said that he believes Manziel will get his chance to shine.

“The Cleveland quarterback, (Brian) Hoyer’s doing a good job so I think Johnny is going to get his chance in the NFL one day and he’s going to be a good quarterback.”

Staubuch also said that he gave Manziel some advice.

“It’s a team game, it’s a team effort and so he is such a good player and he has confidence in himself but he cannot lose the confidence of his teammates. That can happen in a lot of different ways but you never want that to happen whether it’s off-the-field escapades or on the field when you’re not working hard.

“But Johnny works hard and I think off the field he has a good time but it can’t diminish the feelings his teammates have for him as far as trying to win a football game. That’s about the only thing I really talked to him about a little bit. I don’t know if he listened or not but other than that we just had a good time doing the commercial.”

Head coach Mike Pettine cautioned people not to get ahead of themselves, pointing out that there are no awards for being 6-3.

“There’s no prize for being 6-3. The only thing that’s done for us is our games are meaningful now. You still have to have the ability to put that one in a box and move onto the next one,” he told reporters, reported Browns.com.

“It makes it a little more difficult because of what they’ve been hearing now for three or four days, but I didn’t have to hit them with a bunch of coach speak and all that. I think this is a mature group that can handle it. It showed today in how they showed up and how they’ve worked in practice.”

The Browns are atop their division but are followed closely by the three other teams–the Bengals are 5-3, and the Steelers and Ravens are both 6-4.

The players have gotten the message.

“We need to keep our goals at the forefront,” said Paul Kruger, who leads the Browns with six sacks. “You can’t lose focus it. It’s almost like we are anxious for the next opportunity.”

“We still have seven games to go,” added Andrew Hawkins. “It was cool to reflect on it all with a couple days off but I think if you ask anybody on the team, we’re all moving forward.”

Karlos Dansby, who leads the team in tackles with 69, said that the team is working on the defensive game plan for the Texans.

“We’re one step closer. We’ve got to keep it together and keep finishing ball games,” said Dansby.

Gipson Out With Concussion

BEREA, Ohio—Browns safety Tashaun Gipson missed his second straight day of practice with a concussion and may sit out Sunday’s game against Houston.

Gipson, who leads the NFL with six interceptions, was injured in last week’s win over Cincinnati.Browns coach Mike Pettine said Gipson was hurt when he was kneed in the head while forcing a fumble. Pettine said the team has not ruled Gipson out for this week, but he’s following the league’s procedures on head injuries.

If Gipson can’t play, Jim Leonhard and Jordan Poyer will get time at free safety.

Browns Pro Bowl tight end Jordan Cameron was back on the field after missing the past two games with a concussion. Cameron was hurt in the Oct. 26 win over Oakland.