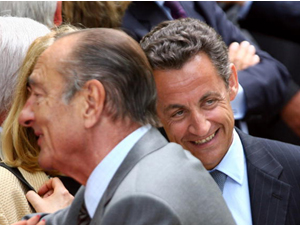 French President Jacques Chirac (L) and President-elect Nicolas Sarkozy (R) greet the crowd 10 May 2007 at the Luxembourg gardens in Paris, Chirac did much to support the Chinese regime despite its horrendous human rights record; the Chinese regime hopes Sarkozy will do the same.(Thomas Coex/AFP/Getty Images)
China

On May 6, the headlines of Xinhua , the official media of the Chinese Communist Party (CCP), spoke in glowing terms of Nicolas Sarkozy's victory in the French presidential election. During the election campaign, the Chinese communist regime used its state-controlled media to instigate anti-American sentiment in mainland China, while highlighting the ongoing election race.

The CCP's Provocation: Sarkozy is Not Bush's Toady

After the first round of voting in the French presidential election, China Daily published a commentary titled “Sarkozy Is Pro-American But Not Bush's Toady.” The article, full of provocative remarks such as, “it is unlikely that Sarkozy will become someone's toady,” claimed that Sarkozy “dislikes the United States's self-assumed role as the world's savior,” and that “he [Sarkozy], like Segolene Royal, is confident in France's strength. If he feels that the United States's foreign policy infringes upon the interests of France and Europe, he will have a face-off with Washington D.C.”

China Morning Post reprinted the China Daily article on April 23, stating that Sarkozy was unwilling to let the United States alone control international affairs. It said that several large countries, such as the United States, China and France, should contribute toward guiding the world's development together.

The official media also quoted Sarkozy as saying that France and even all of Europe, had not caught up with the pace of China's development, and were in fact falling behind.

According to the renowned Chinese human rights activist Wei Jingsheng, in recent years, the CCP has been playing the “French card” in international affairs to keep the United States at bay, splitting up Europe and sowing discord among the strategic alliances between the United States and European nations.

While campaigning for the French election, some candidates suggested boycotting the 2008 Olympic Games if the CCP fails to improve its notoriously bad human rights record.

Regarding this sensitive issue, the Chinese authorities openly revealed through China Daily on April 22 that Sarkozy had ordered his subordinates to give the Chinese reporters a response [as the CCP expected].

The China Daily article claimed that in response to calls for a boycott, Sarkozy had set himself in direct opposition to those who opposed the Beijing Olympics.

The CCP's official media then widely promoted China Daily's report on Sarkozy's response, stating, “If Sarkozy wins France's presidency, he will definitely attend the opening ceremony of the 2008 Beijing Olympic Games once he receives China's invitation.”

With the exposure of organ harvesting from living Falun Gong practitioners, Chinese scholars, international human rights organizations, and VIPs in Europe and the United States have called for a boycott of the Olympics in Beijing, saying that the CCP has never followed the spirit of Olympic Charter. Consequently, most heads of state or governments have spoken cautiously concerning the Beijing Olympic Games.