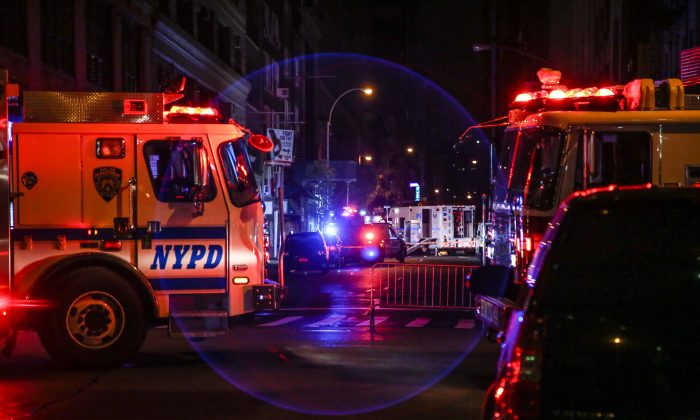 The New York Police Department and the fire department investigate a potential bomb threat on 27th Street in the Chelsea neighborhood of Manhattan on Sept. 19, 2016. (Benjamin Chasteen/Epoch Times)
Crime and Incidents

The New York Police Department and the fire department investigate a potential bomb threat on West 27th Street in the Chelsea neighborhood of Manhattan on Sept. 19, 2016. (Benjamin Chasteen/Epoch Times)

As investigators comb through evidence from the scene of the explosion that injured 29 people in New York City’s Chelsea neighborhood on Sept. 17, video surveillance has emerged of the moment leading up the blast.

Footage of a man planting a pressure-cooker bomb near a dumpster just before the explosion is depicted in one of the videos, reported CBS News. Another video shows the same man at the second scene of West 27th Street, where an unexploded improvised explosive device (IED) was later found, “carrying what appears to be some type of case,” reported the network.

On Monday morning, Mayor Bill de Blasio appeared on “Good Morning America,” where he told George Stephanopoulos that the safety of New Yorkers is the city’s main priority.

“NYPD is in a very high state of vigilance. We have beefed up our presence all over this city. People have bags checked in subways, you’re going to see a lot of NYPD presence at key sites around the city, including our anti-terror capacity, which will be out in evidence,” he said on Sept. 19. “I’m confident about what the NYPD have out in the streets of New York City today.”

The FBI and NYPD announced it had identified a suspect in connection with the Chelsea explosion—Ahmad Khan Rahami.

In an appearance on “Fox & Friends,” Governor Andrew Cuomo confirmed Rahami is a suspect.

“The investigation is now focusing on one individual,” Cuomo said. “That would suggest by this individual there is a foreign connection to this attack.”

Saturday’s night explosion reportedly occurred at 1535 23rd Street between Sixth and Seventh Avenues at around 8:30 p.m., according to police commissioner, James P. O’Neill. The homemade pressure-cooker bombs contained shrapnel and a cellphone was utilized to detonate the device, said police.

Videos released by Orangetheory, a Chelsea fitness center showed the moment the bomb detonated nearby, resulting in the shattering of its doors. The fitness center located at 124 W. 23rd St. released a statement via its Facebook page.

“Due to the explosion, Orangetheory Fitness Chelsea is closed and will re-open as soon as possible. Fortunately there were no injuries to our members, coaches or staff, and our thoughts and prayers are with those who were affected. We are working with local authorities to help as much as possible to determine what happened,” the statement read.

The investigation into the bombing continues.