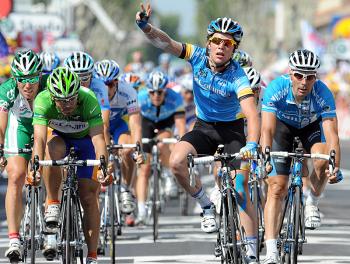 By James Fish
Print
Mark Cavendish, brilliantly supported by his Columbia teammates, sprinted to the win in Stage Twelve of the 2008 Tour de France, beating such noted riders as Gert Steegmans, Thor Hushovd, and Erik Zabel, to claim his third Stage win.

Cavendish has shown again that he is simply the fastest man on two wheels over the last 500 meters. Quickstep, Milram, and Credit Agricole all set up their sprinters with every advantage, and Cavendish simply rode by them all.

Stage Twelve was a flattish, high-speed stage favoring what are called rolleurs—riders who are strong, steady and fast over a long distance. The 168.5 km route actually sloped downhill—despite a few climbs (one a Category Four, the rest just hills) the overall route drops 350 meters from start to finish. The last four km start with a steep dip then a gentle downward slope, with a little lump at the 1-kn mark, then a gentle sloe down to the line.

The stage could certainly be a great opportunity for sprinters—if and only if the field isn’t shredded by breakaways. It is the breakaways that could be the story of the day—a stage like this could favors attacks, but with the tremendous pace the peloton has set in every stage this race, it was possible the big teams would keep all attacks in check so their sprinters could contest the finish.

Ricco Out in Disgrace

The worst news of the day is certainly the positive drug test of double-stage-winner Riccardo Ricco. Ricco tested positive for CERA, and new form of EPO. Ricco was booted form the Tour, and the entire Suanier Duval team has joined him. It is not know whether the team left in sympathy, in protest, or because the entire team feared further what tests might reveal.

While it is encouraging to see the effectiveness of the testing program, it is quite depressing to see someof the favorites tossed out for cheating.

When a rider turns in a great performance, everyone respects and admires his efforts. When he is subsequently banned for doping, everyone is a bit less willing to appreciate the efforts of the next winners, because no one wants to be duped a second time—after cheering on a great rider, only to find one was cheering for a chemical, one is less inclined to cheer at all.

Make no mistake—watching the performance of these riders is an emotionally moving experience for the fans, and no one wants to have his or her emotions played with.

If riders do not stop cheating, fans will stop being excited by the performance of even the clean riders. Too many times the best riders are brought down by doping, and the fans are brought down with them. After some number of these incidents, the fans simply won’t come back.

The first serious break came at the 36 km mark, when two riders, Samuel Dumoulin of Cofidis and Arnaud Gerard of Francaise de Jeux, opened a gap of over a minute.

The peloton was traveling at an astronomical 51 kph, staying organized to keep the chase within a reasonable margin.

Quickstep and Columbia led the peloton—Silence–Lotto was saving energy and protecting overall leader Cadel Evans. “We are here for the yellow jersey,” Silence- Lotto competition director Hendrik Redant told reporters. “It’s not up to us to ride tempo. There are teams with sprinters here and I think it’s their day to do something. If they have a sprinter, then they should do some work to limit the gains of the escape.”

Oroz of the Euskaltel Eusakdi rider Juan José Oroz attacked, crossing the gap to join the leaders. He tried to attack again, but Dumoulin and Gerard were having none of it

With 25 km to go the route changed direction, so the stiff crosswind than had been harrying riders all day became a tailwind, pushing the riders on.

With 9 km to go, the peloton caught the breakaway.

With 6 km to go CSC tried to take the lead and push the pace so that no other teams could set up to lead out their sprinters. With four km to go, Team Columbia jumped to the head of the peloton, hoping to set up Mark Cavendish for his third stage win.

With three km to go the peolton was weaving, stretching, and bunching as teams tried to line up for their sprinters.

Columbia had the lead, but Credit Agricole came up fast through the middle with 2km left. Columbia rider George Hincapie took the lead down the left-hand side of the road; Columbia had excellent organization, but sprinter Marl Cavendish got caught back a bit. With 1.5 km to go Milram charged up the right, bringing up Erik Zabel.

In the last km Credit Agricole had its riders in line, with a pair of Quickstep riders leading. Suddenly two Columbia riders, Cavendish following a leadout, emerged from the pack on the right and moved up smartly, passing Hushovd and Steegmans.

With half a kilometer left, Cavendish cut left into the center of the road and exploded out of the pack—no one could catch him. Gert Steegmans was on his right shoulder, Thor Hushvod on his wheel, Erik Zabel on his left, and Cavendish simply left them all behind.