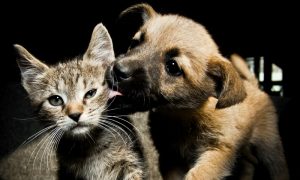 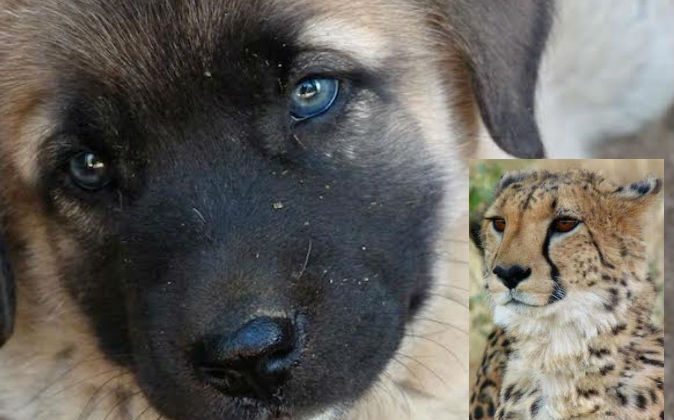 Someday, this puppy may grow up to non-violently fend off cheetahs and other predators. (Niki Rust)
Africa

The last couple centuries have seen the decline of many large predator species. While there has been a surge of recovery and reintroduction programs to combat this problem, human population growth and limited protected areas have led to increased rates of human-wildlife conflicts in many regions of the world. A study published recently in the Wildlife Society Bulletin tested the ability of trained guarding dogs to protect livestock in South Africa and found it to be highly effective, protecting humans and predators alike.

In South Africa, predators such as large cats often live in close proximity to farmlands and often times will prey on livestock. Predation of livestock can take a toll on farmers’ income, often costing more than $3,000 in annual losses. This, in turn, can lead farmers to hunt and kill cats as a means of protecting their livelihoods.

Dogs are commonly used to guard livestock in the U.S. and Canada. (Niki Rust)

Cheetah Outreach is a Non-Government Organization (NGO) based in South Africa that aims to protect large, carnivorous cats. They actively seek out alternative solutions to predation that can help famers protect their livelihood without further endangering these predators. Cheetah Outreach has started a program to provide livestock-guarding dogs to farmers in hopes that the dogs will drive away predators, reducing livestock losses and, in turn, the hunting and killing of the cats.

Similar programs have been implemented in North America and have proven to be quite successful. In her recent study, Ph.D. student Niki Rust set out to determine the success rates of such efforts, as well as the cost-effectiveness of using guarding dogs in South Africa.

The dogs were given to farmers who requested to be part of the program because of previous livestock losses due to depredation.

Niki Rust with her research subjects. (Courtesy of Niki Rust)

“Many farmers were very receptive to alternative methods of predator control, particularly because they were sick and tired of having predators come and take their animals,” Rust told mongabay.com “It is not a pleasant experience to see one of your beloved prized breeding goats be half-eaten by a carnivore, and the losses many of the farmers were suffering were severely affecting their profits.”

Rust found guarding dogs were very effective at reducing livestock losses on South African farms. During the placement period, depredation was reduced by at least 33 percent at every participating farm and eliminated completely at more than 90 percent.

“[Livestock guarding dogs] work very well once they’ve been trained and can reduce depredation to zero in some cases,” Rust said. “What was surprising was just how effective they were, especially when up against pretty ferocious animals such as leopards and spotted hyenas!”

Rust also surveyed some of the farmers involved in the program to see if their attitudes towards predators have changed. She found the majority had become more tolerant of cheetahs on their land. Farmers also reported a perceived increase in cheetah numbers after a year of having the dogs.

Another successful outcome of this study was the cost-effectiveness aspect of the guarding-dog program. The cost of running the program for the first year (including food, vet bills, salary and travel fees for a “Dog Officer,” etc.) was still less than the amount that farmers saved by having the dogs on their property.

Based on this outcome, Rust suggests a government-funded guarding-dog program would work better than the systems already in place.

“A lot of countries have government-run compensation schemes to reimburse farmers for losses to predators, but these are often fraught with problems such as delay in payment, difficulties proving stock were killed [by] predators, and corruption,” she said. “Also it can make farmers lazy to protect their stock properly because they know they’ll get reimbursed for their losses. But if there was a scheme that provided dogs to farmers then I think that would work far better than compensation because it would be a one-off thing (or at least for the life of the dog).”

Cheetah Outreach is currently working on ways to make the program even more effective and implement it on a larger scale, while researchers continue to analyze the social aspects of the program and the behavioral responses of the predators to the presence of dogs.

Republished with permission from Mongabay.com. Read the original.