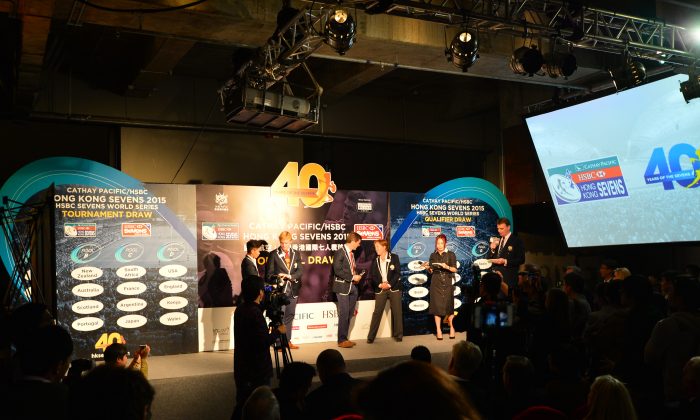 HONG KONG—The official draw for the Cathay Pacific/HSBC Hong Kong Sevens 2015 to be played from March 27-29 took place on Monday Feb 16 in Central Hong Kong. The tournament celebrates the 40th year of the Hong Kong Sevens.

This year there will be three concurrent tournaments; the Sevens World Series Core Team Competition featuring 15-core teams plus Belgium invited by World Rugby, the HSBC SWS Qualifier event comprising 12-mens teams and the Hong Kong Women’s Sevens also with 12 teams involved. Winner of the Men’s Qualifier competition will gain a direct place as a core team in the 2015-2016 series.

The World Series draw is divided into 4-groups (A, B, C and D) with 4-teams per group while the Qualifier Competition has 3-groups (E, F and G) of 4 teams for the round robin stages. The women’s competition also has 3-groups (A, B and C) of 4-teams.

The result of the draws which were undertaken in front of a large audience of invited guests: