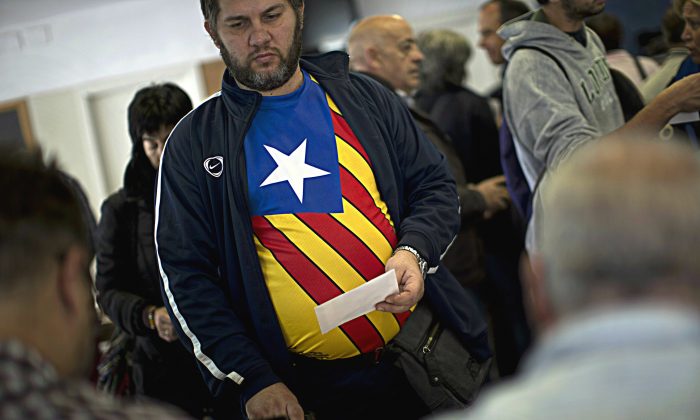 Carlas Albert, 45, waits to cast his vote for an informal independence poll in a polling station in Barcelona, Spain, on Sunday Nov.9, 2014. (AP Photo/Emilio Morenatti)
Europe

BARCELONA, Spain—For a fourth consecutive year, hundreds of thousands of pro-independence Catalans are gearing up to rally Friday to break away from Spain, kicking off a fresh secession bid in a push to carve out a new European nation.

After the central government rejected efforts by separatists to hold an independence referendum, Catalan politicians are now heading toward a Sept. 27 regional parliamentary election with candidates staking out positions for or against an independent Catalonia. The northeastern region of 7.5 million people is marked by fierce pride in Catalan language and traditions.

The massive rally for the Catalan National Day holiday on Sept. 11 marks the kickoff of campaigning for secessionists who say Catalonia is culturally different from Spain, doesn’t get back what it pays in taxes — and that independence is the only way forward. The latest effort follows rebukes to requests for greater self-governance by the Madrid central government.

The protest also starts an end-game for the independence drive because the election results will determine whether the region embarks on an 18-month “path to independence” or puts its secession aspirations on hold. Madrid has vowed to block any formal secessionist process.

Pro-independence parties need to win at least 68 seats in the 135-member regional parliament to push their effort forward, and polls show they’re on track to win a slim majority.

“If there is a clear result for the ‘Yes,’ it would be a very powerful message that Catalans want to move toward a Catalan state,” said Artur Mas, Catalonia’s regional president and the top-ranking politician in the secessionist camp, which includes parties from across the political spectrum.

Failure to win a majority, however, would mean a setback of years, if not longer, for a movement based on generations-old dreams of a Catalan state, boosted in recent years by Spain’s economic downturn.

Mas says the campaign marks a now-or-never historic moment because if the ‘Yes’ side fails, “the first big party will be in Madrid that night. And that day (secession opponents) can then say that this doesn’t have a future.”

But a separatist electoral victory would set them on a collision course with Madrid and could cause a ripple of secessionist fervor around Europe.

Former European Commission President Jose Manuel Barroso and British Prime Minister David Cameron have said regions like Catalonia that secede from a European Union member state would have to apply for re-admittance. And investors cringe at the uncertainty an independence drive would create for Spain’s economy, just as it recovers from a punishing recession and is finally reducing a 22 percent jobless rate.

“Independence is not feasible, it would produce a social crisis that would be terrible for Spain and would interrupt the economic recovery,” Spanish Finance Minister Cristobal Montoro warned this week.

While Scotland rejected independence from the United Kingdom last year in a referendum, a victory for the Catalan separatists could jumpstart secession sentiment in areas of Europe where it has waned or lies largely dormant like Spain’s Basque region, Flemish-speaking Belgium and Northern Italy.

But even if pro-independence supporters win a significant majority, analysts predict they will be unable to convince European nations to recognize a unilateral declaration of independence. Such a declaration would happen only after regional lawmakers spend 18 months drafting a constitution, setting up institutions and forging laws for the new state.

One big problem is that the vote is an indirect plebiscite, unlike the Scottish referendum that saw voters cast ballots on a clearly worded question. To have lawmakers, rather than voters, make the official call on secession is an unprecedented situation, but independence supporters say they’ve been forced into it by Madrid’s refusal to allow a referendum.

Recent polls by three Spanish newspapers that forecast pro-independence parties winning at least 68 seats also show they would get less than half of the overall vote tally, further hurting the legitimacy of a possible ‘Yes’ outcome.

The twist stems from Spanish voting rules that give more weight to votes cast in under-populated regions. And separatist sentiment runs higher in rural Catalan regions than it does in urban areas like the regional capital of Barcelona, Spain’s largest city after Madrid.

A majority win for pro-independence parties in the regional parliament “is not enough to obtain the recognition of the international community because we are talking about a result of elections and not about a result of a referendum,” said Ferran Requejo, a political science professor at Barcelona’s Pompeu Fabra University.

Catalan separatists would be left needing to win over lawmakers in Madrid and Brussels, something that has proven impossible so far. And a win would create more than a year of uncertainty over the future of Spain and Catalonia, with the region running the risk of Madrid stripping it of its governing powers.

“We are facing a complicated situation,” said Jordi Matas, professor of political science at the University of Barcelona. “A government will be formed with the primary goal of negotiating for and creating institutions to become a state.”

The run-up to the vote starts with Friday’s rally. David Jardi i Fort, an architect from the city of Tarragona, says he will attend with his parents because they don’t want to miss the watershed event for Catalonia.

The event “will make history, whatever happens things will not be the same,” he said.

While the pro-independence side’s rallies win support from the ruling regional government and Catalonia’s public television, Catalans who want their region to stick with Spain usually lay low on the sidelines and avoid speaking out publicly for fear of being ostracized.

The central government is counting on citizens who consider themselves Catalan and Spanish — and do not want to risk losing any part of their identity — to defeat the effort.

Jaime Bautista, a 67-year-old retired leather worker, will stay at home for Friday’s rally and vote for a party opposed to independence.

“I see that Catalonia and Spain can live together. Union makes us strong,” he said. “Where would Catalonia be without Spain? What currency would we have? What army?”