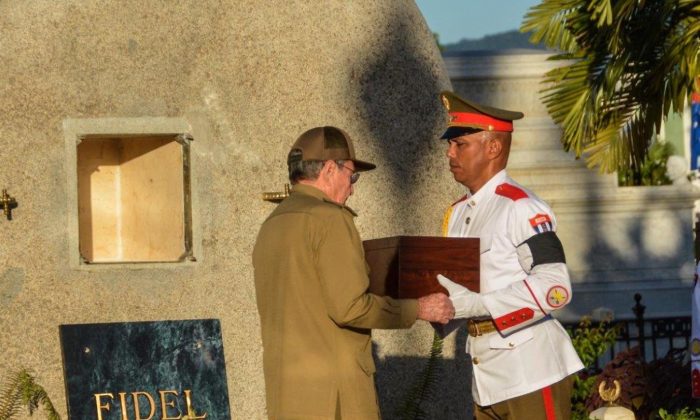 Cuban President Raul Castro places the urn with the ashes of his brother Fidel Castro in his tomb at the Santa Ifigenia cemetery in Santiago de Cuba on Dec. 4, 2016. (MARCELINO VAZQUEZ/AFP/Getty Images)
Opinion

The recent passing of Fidel Castro at ninety has unleashed torrents of both praise and criticism. The favourable school, led by Canada’s prime minister, was first off the mark. Justin Trudeau termed him “a legendary revolutionary and orator”, but presumably seeking to demonstrate a better tone and some balance, conceded that he was “controversial” and declined to attend his funeral in Havana.

With many others across the democratic world, the Globe and Mail columnist Margaret Wente was blunt in her response to Trudeau, noting that Castro “lined up his (political opponents) against a wall and shot them.”

She added the he also labelled the LGBT community “faggots” and “worms” and locked them in prisons. Approximately a fifth of the Cuban people attempted to escape the country under his tyranny in homemade boats, with tens of thousands drowning. Wente noted too that in 1966 he executed 166 Cubans, first removing most of their blood for sale to the Viet Cong.

For three decades until about 1991, the Soviet Union provided about $6 billion a year to Castro’s Cuba, including subsidized oil, food, machinery, and other goods needed to keep some Cubans from starvation. Hugo Chavez of Venezuela replaced Moscow as the main life line after 1998. The average official salary today is only in the $25 a month range. After 1961, Cuba became in reality a prison for all but Fidel and his party cronies.

Another lens through which to assess Castro is his relations with the Catholic church in which he was born and educated. Victor Gaeten recently chronicled his manipulations there in the National Catholic Registrar:

The overall situation began to improved only when Raul Castro replaced his brother in 2008. He allowed small private restaurants and kiosks, but the former oppression returned in 2012 when democracy advocates Paya and Cepero were murdered in a fake car accident.

In short, the long suffering admirable people of Cuba deserved so much better from their now gone leader. His defenders say he stressed education and free and universal health care, but there was only one Party newspaper, Granma, across the island and few opportunities for fulfilled lives.

Cubans and their many friends around the world can only hope that new leadership in Havana will bring better days and human dignity for all.