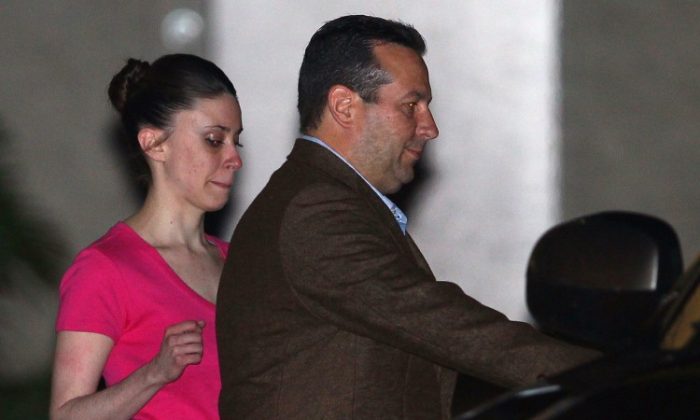 Casey Anthony (L) and her defense attorney Jose Baez leave the Booking and Release Center at the Orange County Jail after she was acquitted of murdering her daughter Caylee Anthony on July 16, 2011, in Orlando, Fla. Anthony has a court appointment on March 4 to answer questions about her bankruptcy claim. (Mark Wilson/Getty Images)
US

A former lawyer for Casey Anthony, the Florida woman acquitted in the death of her 2-year-old daughter, Caylee, said he may sue over claims levied by a former private investigator.

In an affidavit filed in her bankruptcy case in April, Anthony’s former private investigator, Dominic Casey, claimed that lawyer Jose Baez and Anthony were allegedly involved in an improper relationship before the case went public. In the documents, which went public this week, the private investigator also alleged Baez told him that Anthony “had murdered Caylee and dumped the body,” reported the Miami Herald.

Baez has now responded to the allegations, issuing a blanket denial that included the threat of legal repercussions.

In a statement on Wednesday, the lawyer said he “unequivocally and categorically [denies] having any sexual relationship with Ms. Anthony whatsoever.”

“I have always conducted my practice consistent with the high ethical standards required of members of the Florida Bar,” he said to People magazine. “My representation of Ms. Anthony was no exception.”

Dominic Casey also claimed in the 15-page affidavit that Baez “told me that Casey had murdered Caylee and dumped the body somewhere and, he needed all the help he could get to find the body before anyone else did.”

Baez slammed his other claims.

“This libelous claim is in line with many other outrageous claims and theories that this individual has advanced regarding the Casey Anthony case,” the statement read.

In the court papers, Dominic Casey said Anthony allegedly wanted to frame a utility worker who found the remains of her daughter. “Casey Anthony told me when Caylee came up missing, the back gate was left ajar,” he said in the affidavit. “Since Roy Kronk was a meter reader for the house, maybe ‘we could say Roy Kronk kidnapped Caylee.'”

Anthony was acquitted of the most serious charges in 2011.