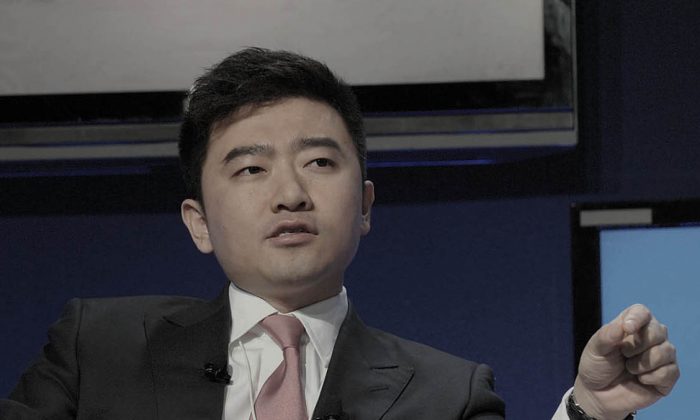 China Business Journal reported on April 12 that the trial of former CCTV host Rui Chenggang and related cases would open soon. This report was quickly removed after major media in the country picked up the news.

Citing an unidentified core member within Jilin Province’s judicial system, China Business Journal reported that the hearing of the 29 cases involving CCTV, including that of Rui, are near.

However, the original report cannot be found on China Business Journal’s website now, and the reproduced versions on other mainland media have all been removed as well. This “now-you-see-it, now-you-don’t” phenomenon in the news sparked widespread discussion.

The fact that Rui, who was arrested in July 2014, has suddenly sprung into attention has caused speculation that this may be related to the case of Ling Jihua, former Vice Chairman of the National Chinese People’s Political Consultative Conference.

Recently, overseas Chinese media have released news of Ling on and off, claiming that his case would be open for trial in the near future. This led some analysts to speculate that the news about Rui’s case is a prelude to Ling’s trial.

When he was arrested, Rui was a relatively well-known host on the CCTV financial channel, but what really brought him into the limelight was his connection with Ling’s case.

Rui was arrested just when Ling, who was then Minister of the United Front Work Department, was in a precarious state. In September 2014, some online sources claimed that he was arrested for being a “foreign spy” who disseminated dark secrets of Premier Xi Jinping.

Ling was arrested on Dec 22 that year, but it is believed that he had already handed over a large quantity of confidential material to his brother Ling Wancheng, who escaped to the United States. Rui was also said to have a “special relationship” with Ling’s wife, Gu Liping.

In addition to Rui, another CCTV staff member, Guo Zhenxi, was arrested on May 31, 2014 under the charge that he was a crucial partner of the Youth Business Program (YBC) founded by Gu during Guo’s tenure as the director of CCTV’s financial channel.

Some analysts believe that Ling will be charged in the name of corruption as well, and the “corruption drama” of the CCTV management paves the way to his case.

Guo, who had always been regarded as a heavyweight in the government-controlled TV industry, worked in CCTV for 22 years. Earlier reports revealed that Guo, under the guise of his family and friends, set up umpteen companies under his charge, amassing assets worth at least 2 billion yuan over eight years as the director of CCTV’s financial channel.

According to Sina North America and other overseas Chinese media, after Guo was implicated by Rui and others, he revealed whatever information he had on Rui, including his collusion with Ling to form the “royal troops,” billion-yuan corruption, and intelligence service, all nailing his inevitable doom.

These reports quoted Zhongguo Mibao as stating that before the downfall of former Minister of Commerce Bo Xilai, Rui frequently bragged about his relationship with Bo’s son Bo Guagua, who often attended overseas activities with him.

Rui was also a debauched companion of Zeng Qinghuai, the brother of Zeng Qinghong, who controlled the CCTV Arts Channel from behind the scenes for over a decade.

Some hostesses, whose identities were exposed by the media, were also summoned to assist in the investigation but were not detained.

On Dec 22, 2014, shortly after Ling was placed under investigation, CCTV financial channel producer Luo Fanghua, the wife of Gu Yuanxu (Ling’s brother in-law), could not be contacted. According to Chongqing Morning Post, several staff members in the financial channel confirmed that the latter had been taken away by authorities.

Shortly afterward, Gu, who was then the deputy director of the Heilongjiang Province Public Security Department, was taken in for questioning.

According to China Business Journal, due to the unique position of the CCTV staff, many movie and TV stars were implicated in the series of cases. The investigation authorities summoned them for assistance while probing the case in Beijing, but most of them were not deeply involved.

The report categorically mentioned Li Dongsheng, the former deputy director of CCTV, claiming that the investigations focused mainly on his disciples. Also highlighted was his former position as the director of the “610 Office,” the organisation set up to persecute the spiritual practice Falun Gong.

Li, who fell from power in December 2013, was closely related to Zhou Yongkang, a former member of the CCP’s Politburo Standing Committee and a member of former CCP leader Jiang Zemin’s faction. With no background in the public security system at all, Li was transferred to the Ministry of Public Security in 2009 to head the organization in charge of suppressing Falun Gong.

Li was favored by Zhou because he actively cooperated with the propaganda campaign to smear Falun Gong during his tenure in CCTV, while turning CCTV into a harem for high-ranking CCP officials. Female anchors of CCTV became his “tributes” to them, including Zhou, whose wife, Jia Xiaoye, is also regarded as a part of Li’s “sexual bribery” of his boss.

Meanwhile, CCTV, which holds the power to speak on behalf of the CCP, has become a power wrestling field for the top echelon of the CCP. Zhou’s lackey Li continued to control CCTV’s power to speak through personnel promoted by him, even after he was transferred to the Ministry of Public Security.

Ling, who was tied to Zhou in the “New Gang of Four” by mainland media, also worked to cultivate his own forces in CCTV. He landed his lover, sister in-law, and brother in-law, among others, in various positions to serve his political objectives.

Observers believe that Rui will be charged in the name of corruption, which is not the crux of the problem.

On Feb 13, 2015, the CCP mouthpiece People’s Daily published a signed article on webchat commenting on the case, saying that the problem with Rui is first that he is “too ambitious,” and second that he is “too anxious” and “anxious for fortune,” and that this “may lead him to be unscrupulous and break the law, and hence perhaps take the wrong path, the crooked road, and evil ways.”

Commentator Lan Xin said the notion of the “wrong path” and the “crooked road” is applicable to corruption, but “evil way” is apparently alluding to political issues.

Meanwhile, regarding the rumour that Rui was a foreign intelligence agent, Xinhua Net published an article titled “Rui exposed to be a spy, netizens demand severe punishment if true,” apparently to express the government’s stance on the case through the mouths of “netizens.”