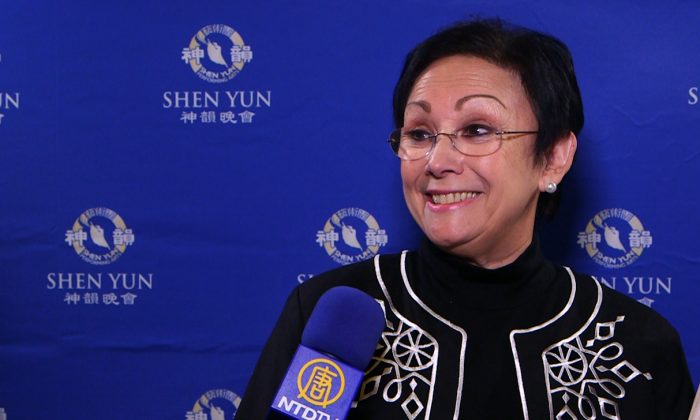 ESCONDIDO, Calif.—Silvia Moreno said she had no idea she would be treated to such a beautiful event on Jan. 26, after watching Shen Yun Performing Arts for the first time.

“It was spectacular,” said Ms. Moreno, a retired cable company employee, at the California Center for the Arts, following the evening performance.

“The grace—it was beautiful. I’m glad that I came,” she said.

New York-based Shen Yun Performing Arts aims to bring back the true, traditional culture of China through the highest caliber of music and dance.

From the moment the curtain first went up, Ms. Moreno said she experienced the wonderful feeling of being in a heavenly realm.

The grace, it was beautiful.
— Silvia Moreno

A Shen Yun performance places its focus on classical Chinese dance, an art form perfected throughout 5,000 years of Chinese culture. Accompanied by a full orchestra incorporating traditional Chinese instruments, the dances tell legendary stories of various dynasties and ethnicities within this rich culture.

Powerful and impassioned vocalists and instrumental soloists are also featured in the performance.

The lyrics of the solo singers, who sang in Chinese but had English lyrics projected behind them, gave Ms. Moreno a message of family, faith, and hope.

“We need it,” she said of this message. “We need it badly, especially for the new generation that we have now. It’s necessary. We need to have that faith and you don’t see it very often.”

Ms. Moreno said she thought Shen Yun was very educational and hoped to bring her granddaughters next time. She said they are into dance and would absolutely love to see it.

She and others with her agreed that the performance could be described in one word— inspiring.

“I just hope to see it again,” Ms. Moreno said. “They [the emcees] say it’s different every year so I’m looking forward to that!”

Since Shen Yun was founded in 2006, it has become a global phenomenon. Now with four touring companies visiting some 20 countries and 100 cities every year, the company has touched the hearts of millions.

“I’m hoping that it gives everybody a message,” she said. “You carry it in your heart and you live by it.”