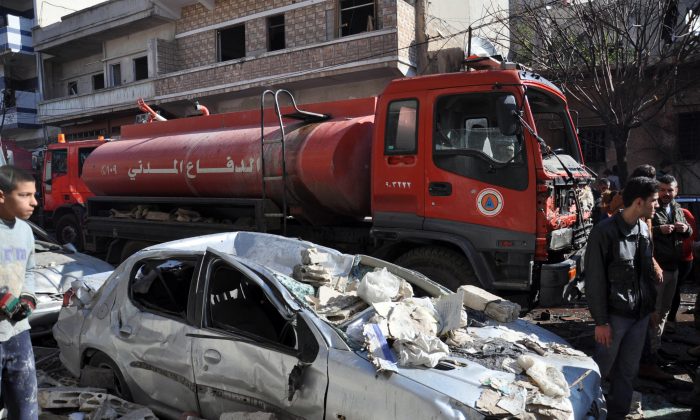 A firefighter truck is seen next to a destroyed car at the site of a car bomb explosion where 16 civilians were killed and a hundred wounded in al-Zahra neighborhood in Homs, Syria, on Dec. 12, 2015. (STR/AFP/Getty Images)
Middle East

Car Bomb Near Hospital in Central Syria Kills at Least 16

The Observatory said an army colonel, a policeman and woman were among the 16 killed in Homs. Homs Governor Talal Barazzi said most of the 16 dead were women and children, adding that 15 of the wounded were treated at hospitals and released.

Saturday’s blast came a few days after hundreds of rebels and their families left Waer, the last opposition-held neighborhood of Homs, as part of a local truce that will bolster government control of the city. The Observatory said trucks carrying aid entered Waer on Saturday as part of the truce.

SANA and the Observatory said the blast occurred near a hospital in the Zahra neighborhood. SANA added the car that exploded was rigged with some 150 kilograms (330 pounds) of TNT and that shortly after the blast, a gas cylinder blew up in one of the nearby shops and wounded several policemen.

In northern Syria, the Observatory and the Local Coordination Committees—another opposition group that tracks the country’s civil war—said Russian airstrikes hit the rebel-held town of Atareb. The Observatory said 10 were killed in the airstrikes while the LCC said four were killed.

Russia has been one of the strongest supporters of Syrian President Bashar Assad since the start of the crisis in March 2011.

Meanwhile in the northeastern province of Hassakeh, the Syria Democratic Council, an alliance of Arab, Kurdish, Christian and Turkmen groups and figures, elected two co-presidents at the end of two-day meeting, the coalition said in a statement.

Haitham Mannaa, head of the Syria’s QAMH Movement and Ilham Ahmad of the Kurdish Democratic Society Movement were elected as heads of the SDC. It is the political wing of the Syria Democratic Forces, which has been a major coalition fighting the Islamic State group, said Nasser Haj Mansour, a defense official in Syria’s Kurdish region.

The meeting in Syria followed a recent gathering of opposition figures in Saudi Arabia in an attempt to unify the fractured opposition ahead of possible peace talks to end Syria’s crisis in early 2016.

Also Saturday, the Free Syrian Army that consists of rebels fighting against government forces denied statements made a day earlier by Russian President Vladimir Putin that Moscow has been supporting some rebel factions.

FSA commander Ahmad Barri said in a statement that Russia is not giving weapons to the rebels but “attacking Free Syrian Army strongholds every day.” He added that Russia is an “aggressor that backs Assad’s criminal regime that has been carrying out massacres against the Syrian people for five years.”

Syria’s civil war has killed more than 250,000 people and wounded a million.