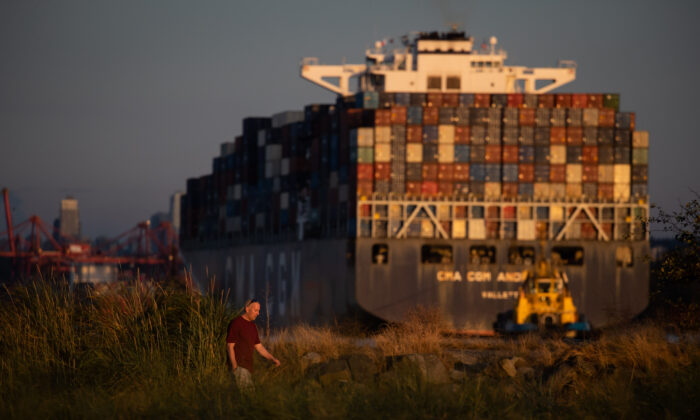 A man walks on Ambleside Beach as a container ship is guided into port by tugboats at sunset in West Vancouver, B.C., on Aug. 13, 2022. (Darryl Dyck/The Canadian Press)
Canada

A majority of Canadians and Americans say they find China to be the greatest health threat to their countries, while agreeing that Chinese goods should be a top priority for inspection, a Nanos Research poll shows.

This synchronized view of the threats posed by China was published in the latest release of an 18-year tracking survey, co-conducted by the Canada-based Nanos and the University at Buffalo in New York. This latest survey is the seventh wave conducted since Justin Trudeau became the prime minister of Canada and the second wave with Joe Biden as president of the United States.

The survey found that a majority (59 percent) of Canadians are likely to say that China poses the greatest health threat to their country, while more Americans (66 percent) hold this view.

As for their own countries, a significant portion of Canadians (35 percent) believe the United States poses the greatest health threat to Canada, while 5 percent of Americans hold this view of Canada.

In Canada, the view of China posing the greatest health risk is evenly distributed among residents across the country, with those living in the Prairies most likely (61.8 percent) to hold such belief, followed by those living in Quebec (59.8 percent), British Columbia and Ontario (58.3 percent), and Atlantic Canada (57.4 percent).

The survey also asked the respondents to think of a country from where a package or a shipping container of goods should be inspected most thoroughly by customs officials when entering their country.

China remains the number one country of choice for both Canadians (65 percent) and Americans (45 percent). China first replaced Mexico as the top country of concern for Canadians in a 2014 survey, and has remained at the top of the list since.

Asked about visitors who should be questioned most carefully at the border, communist-led China again ranks as the number one country from where travellers are of concern for Canadians, with 57 percent of respondents saying so. For Americans, visitors from Mexico should require the most attention from border officials, pushing China back to the second spot, as it was prior to the COVID-19 pandemic.

“Canadians and Americans increasingly feel that Chinese goods should be the greatest priority for inspection,” the survey says. “When it comes to visitors, Americans now most often feel visitors from Mexico should be questioned most thoroughly, replacing China at the top spot.”

The survey also asked Canadians and Americans about the relationship between their two countries. For Canadians, most find the British to share the closest values in terms of human rights (43 percent) and family (44 percent), while Americans share the closest business values.

However, a majority of Canadians and Americans agree that their countries should build stronger ties. A total of 57 percent of Canadians believe that Ottawa should have much closer (26 percent) or somewhat closer (31 percent) cooperation with Washington; more Americans believe so, with 30 percent desiring a much closer partnership and 34 percent asking for somewhat closer ties.

Areas of cooperation between Canada and the United States include border security, anti-terrorism, and energy policy.

“An increasingly strong majority of both Canadians and Americans believe that Canada and the United States should work together to develop an integrated energy policy to remove our dependence on oil from the Middle East,” Nanos said.

The company asked residents of the two countries parallel questions on the bi-national issues. A total of 1,002 adult Canadians were surveyed in a hybrid manner, via telephone and online polls, between June 30 and July 4. A non-probability, representative online survey of 1,107 Americans was conducted between July 21 to July 22.