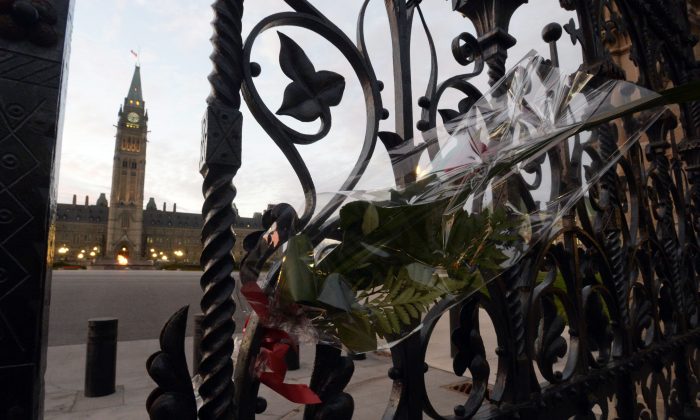 A rose rests in the main gate of Parliament Hill in Ottawa on Thursday, Oct. 23, 2014. Cpl. Nathan Cirillo was killed Wednesday at the National War Memorial by a gunman who then raced to Parliament Hill, where he was killed in a gunfight in the halls of the Centre Block. (AP Photo/The Canadian Press, Adrian Wyld)
Canada

OTTAWA, Ontario—He seemed lost, “did not fit in,” had drug problems, and went more than five years without seeing his mother. In recent weeks, he had been living at a homeless shelter and had talked about wanting to go to Libya — or Syria — but became agitated when he couldn’t get a passport.

A day after Michael Zehaf-Bibeau launched a deadly attack on Canada’s seat of government, a portrait of the 32-year-old Canadian began to emerge, along with a possible explanation for what triggered the shooting rampage.

Bob Paulson, commissioner of the Royal Canadian Mounted Police, said that Zehaf-Bibeau — a recent Muslim convert whose father was from Libya — may have lashed out in frustration over delays in obtaining a passport.

“I think the passport figured prominently in his motives. I’m not inside his head, but I think it was central to what was driving him,” Paulson said.

In what the prime minister called a terrorist attack, Bibeau shot a soldier to death at Canada’s national war memorial Wednesday, then stormed the Parliament building, where he was gunned down by the sergeant-at-arms. Bibeau was armed with what police said was a lever-action Winchester rifle, an old-fashioned, relatively slow-firing weapon.

The attack was the second deadly assault on Canadian soldiers in three days and forced the country to confront the danger of radicalized citizens in its midst.

As for Zehaf-Bibeau’s passport application, it “was not rejected. His passport was not revoked,” Paulson said. “He was waiting to get it, and there was an investigation going on to determine to see whether he would get a passport.”

That obstacle appeared to weigh heavily on Zehalf-Bibeau, a petty criminal with a long rap sheet, including a string of drug offenses.

Abubakir Abdelkareem, who often visited the Ottawa Mission, a homeless shelter downtown where Zehaf-Bibeau stayed in recent weeks, said Zehaf-Bibeau told him he had had a drug problem but had been clean for three months and was trying to steer clear of temptation by going to Libya.

But in the three days before the rampage, “his personality changed completely,” Abdelkareem said. “He was not talkative; he was not social” anymore and slept during the day, said Abdelkareem, who concluded the man was back on drugs.

Lloyd Maxwell, another shelter resident, said that Zehaf-Bibeau had lived for some time in Vancouver, then Calgary, then came to Ottawa specifically to try to get a passport, believing that would be more easily accomplished in the nation’s capital.

“He didn’t get it, and that made him very agitated,” Maxwell said. Maxwell said that he suggested to the man that he might be on a no-fly list, and “he kind of looked at me funny, and he walked away.”

In an email to the AP expressing horror and sadness at what happened, Zehaf-Bibeau’s mother, Susan Bibeau, said that her son seemed lost and “did not fit in,” and that she hadn’t seen him for more than five years until having lunch with him last week.

“So I have very little insight to offer,” she said.

In a brief and tear-filled telephone interview with the AP, Bibeau said that she is crying for the victims of the shooting rampage, not her son.

“Can you ever explain something like this?” said Bibeau, who has homes in Montreal and Ottawa. “We are sorry.”

After initially reporting that two or three assailants may have taken part in the shooting rampage, Canadian police conceded Thursday that Zehaf-Bibeau was the lone gunman.

On Monday, a man described as an “ISIL-inspired terrorist” ran over two soldiers in a parking lot in Quebec, killing one and injuring the other before being shot to death by police. Before the attack, Canadian authorities feared he had jihadist ambitions and seized his passport when he tried to travel to Turkey.

The prime minister noted that both attacks were carried out by citizens born in Canada.

Elizabeth May, leader of the Green Party, said in Parliament that this week’s attacks were probably “the acts of isolated, disturbed and deeply troubled men who were drawn to something crazy.”

Paulson appeared to agree in Zahef-Bibeau’s case, saying that his history of crime, violence, drugs and “mental instability” contributed to his radicalization. Court records indicate Zehaf-Bibeau had a string of convictions for assault, robbery, drug and weapons offenses, and other crimes.

The police commissioner said Zehaf-Bibeau’s email was found on the hard drive of someone charged with a terrorist-related offense. He didn’t say who and described the connection as tenuous.

Meanwhile, Kevin Vickers, the 58-year-old Parliament sergeant-at-arms credited with shooting and killing Zehaf-Bibeau, got a rousing standing ovation in the House of Commons for saving lawmakers’ lives. Vickers, dressed in his ceremonial robe and carrying his heavy mace, acknowledged the applause by nodding solemnly.

The former Mountie said in a statement that he was “very touched” by the attention but that he has the close support of a remarkable security team.