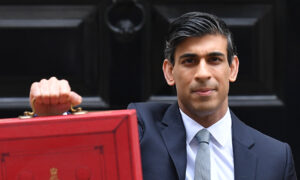 OTTAWA—Canada’s trade deficit grew to a record $3 billion for March as the drop in oil prices weighed on exports, Statistics Canada said Tuesday, May 5, but economists suggested things may pick up.

“Canada’s trade deficit widened to a record in the first quarter, as the weaker Canadian dollar doesn’t appear to have had a meaningful positive impact yet and the U.S. economy struggled in the period,” Bank of Montreal senior Benjamin Reitzes wrote in a note.

“However, with our neighbour to the south expected to bounce back in the second quarter, the loonie staying relatively weak [even if it rebounded in recent weeks], and oil prices staging a modest comeback, Canada’s trade profile is expected to improve in the months ahead.”

The deficit was far bigger than the $850 million that economists had expected, according to Thomson Reuters, as imports rose faster than exports.

Statistics Canada said the March deficit grew compared with February as imports increased 2.2 percent to $45.5 billion, while exports edged up 0.4 percent to $42.5 billion.

The federal agency also revised the result for February to show a trade deficit of $2.2 billion compared with its earlier reading of a $984 million deficit as exports of energy products were updated.

CIBC economist Nick Exarhos said the record deficit will make some headlines, but it is due to oil prices which hit their lows in March.

The Bank of Canada has said it expects no economic growth in the first quarter of this year, but things will improve as the year progresses.

Looking at the details of the trade report, import volumes rose 1.5 percent and prices increased 0.6 percent.

Imports of consumer goods were up 7.9 percent, while motor vehicles and parts increased 3.7 percent. Aircraft and other transportation equipment and parts fell 8.4 percent.