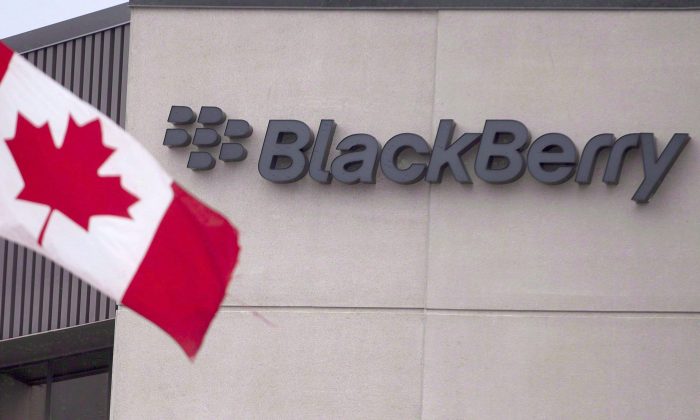 A Canadian flag flies at BlackBerry's headquarters in Waterloo. The Canadian tech sector could gain an edge over the U.S. in attracting talented immigrants. (The Canadian Press/Geoff Robins)
Business & Economy

Canada’s Tech Sector Expected to Get Boost From Trump Fears

MONTREAL—Nervousness in Silicon Valley about Donald Trump’s election could give Canada’s technology sector a competitive edge if new labour restrictions ratchet up the war for high-skilled talent, say industry experts.

In an open letter sent during the campaign, senior executives at some of America’s top tech companies called Trump “a disaster for innovation.”

They expressed concerns about the president-elect’s trade proposals and anti-immigration stance which some fear could result in visa restrictions that would make it harder and costlier for them to hire foreign IT workers.

Each year, tens of thousands of foreigners with specialized skills, such as coders, are granted temporary H-1B visas to work in the United States. While the industry has sought increased numbers of visas, Trump has offered mixed signals as he seeks to protect domestic employment.

Meanwhile, the Trudeau government is changing its immigration-selection system as of Saturday, Nov. 19, to make it easier for international students and some high-skilled foreign workers to become permanent residents.

Is this the reversal of the talent diaspora?
— Ryan Holmes, Hootsuite

Together, these changes could increase Canada’s drawing power for those no longer able or willing to enter the United States, said Patrick Hopf, president of Montreal-based SourceKnowledge, a firm that builds technology to track the success of advertising works for digital videos.

“You might see a seismic shift in technology in Canada,” he said.

Hopf said he received a few such applications in the days since the election.

“Is this the reversal of the talent diaspora that Canada has historically seen and beginning of the U.S. brain drain?” he posted on Twitter.

“We’ve always had a reasonably good draw but America is a powerful magnet for people around the world and now the magnet will be dimmed,” he said.

Not everyone thinks Trump will make dramatic changes to visas. Ian Lee, associate professor at the Sprott School of Business at Carleton University, believes Trump will focus on curtailing illegal immigration without restricting professional workers.

Sean Mullin, executive director of the Brookfield Institute, said the next president can’t afford to alienate the tech sector, one of the strongest areas of the U.S. economy that is headed by some of the world’s most valuable firms.

Mullin doesn’t foresee a mass exodus from the United States by Canadians returning home, but said U.S. policy changes could prompt Canadian startups to think twice about chasing their dreams down south.