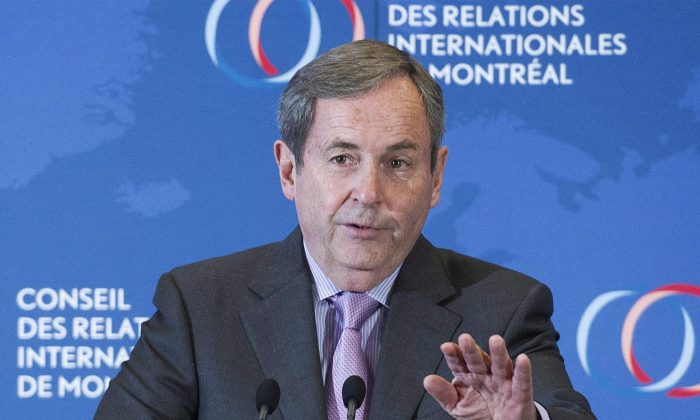 Canada's Ambassador to the Unitied States David MacNaughton speaks during a business luncheon in Montreal on Nov. 16, 2016. MacNaughton is cautiously optimistic that any renegotiation of the North American Free Trade Agreement will go well for Canada. (THE CANADIAN PRESS/Graham Hughes)
Canada

It's hard to know exactly what the new US administration will ask for, says Canada's ambassador to Washington
By The Canadian Press

WASHINGTON—Canada’s ambassador to Washington, who sat in on the Donald Trump-Justin Trudeau summit this week, says he’s now cautiously optimistic about any forthcoming changes to the North American Free Trade Agreement.

Those conversations focused on changes that would be beneficial to both Canada and the United States, as they have done for months in talks with the White House and, before that, the Trump transition team, David MacNaughton said Feb. 15.

“If we’re going to change it, we’re going to do things that are good for both Canada and the United States. That was the spirit of the meeting,” MacNaughton said in Toronto.

“I’m cautiously optimistic. I mean, you never know in these things, but I’m quite optimistic that it’s going to be good for us.”

The U.S. president concluded his meeting with Trudeau with a public declaration that the trade relationship with Canada is outstanding, and suggested he only wants a few tweaks in an upgraded NAFTA.

Some experts warn that making such a promise is not entirely in the president’s purview, and that once major trade negotiations open, numerous stakeholders, industry groups, and politicians will try forcing their issues to the table.

You never know in these things, but I’m quite optimistic that it’s going to be good for us.
— David MacNaughton , Canada's ambassador to Washington

MacNaughton himself added a word of caution: It’s hard to know exactly what the new administration will ask for, because the Trump cabinet has yet to have its commerce and trade secretaries confirmed by Congress.

The confirmation process has been held up by the entrenched partisan warfare in Washington. The disarray mounted this week amid calls for an investigation into connections between Russian intelligence and the Trump campaign.

One cabinet nomination was actually torpedoed on Feb. 15. Trump’s labour choice, Andy Puzder, was in danger of being rejected by the Senate amid a series of controversies related to his policies, past hiring of undocumented workers, and allegations from an ex-spouse—so he dropped out.

The key players on the NAFTA file, meanwhile, are still cooling their heels. Commerce pick Wilbur Ross and U.S. trade representative nominee Robert Lighthizer are both awaiting news on their confirmation.

MacNaughton used a sports metaphor to describe the one-sided nature of the current trade conversation, between a full Canadian government and a partly staffed administration: “It’s a bit of shadowboxing right now.”

He expressed optimism in another area. He hopes there will be a beneficial resolution to differences over so-called “Buy American” restrictions on foreign companies competing for U.S. infrastructure projects; the countries issued a statement after the Trudeau-Trump meeting that included a vague reference to working together on construction.

But some observers say it’s way too early to celebrate.

“I think the initial Canadian reaction on Monday was a bit too exuberant,” said Toronto trade lawyer Mark Warner. “The bottom line is that it all depends on what [Trump] means by ‘tweak.’ … I think it was just a placeholder. Canada wants answers faster than he can give.”

If Trump wants significant changes to NAFTA, he needs to go through Congress. And that process includes a public consultation where the U.S. government receives input from American companies on ideal negotiating positions.

A number of U.S. companies have already voiced gripes about Canadian trade practices. Annual U.S. government reports regularly list grievances related to things like restrictions on milk, cheese, and poultry imports; controls of what liquor gets sold, and where; Canada’s tighter duty-free rules; and limits on foreign competition in the telecommunications and broadcast sector.

If NAFTA undergoes significant changes, that will force Trump to send the altered agreement back to Congress for a vote under the fast-track rules. “I think that means opening Pandora’s box,” Warner said.

From The Canadian Press, with files from Allison Jones in Toronto