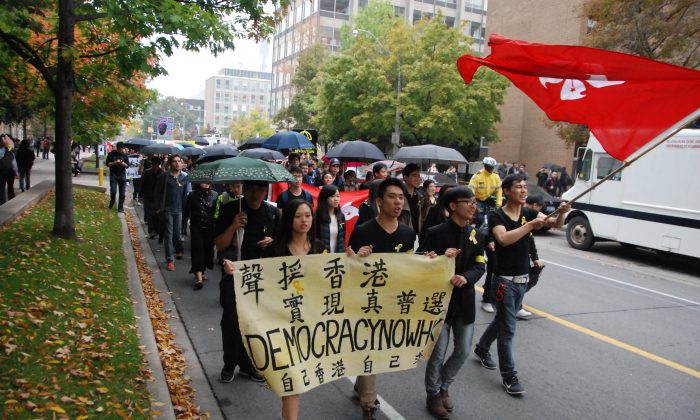 People carry umbrellas on a street in Toronto on Oct. 1, 2014 while demonstrating in solidarity with protesters in Hong Kong. Supporters of democracy took to Hong Kong's streets after the Chinese regime ruled that it would restrict who could run in the 2017 election for the island city's chief executive. (Ling Yi/Epoch Times)
Canada

PARLIAMENT HILL—Hong Kong is in a precarious position and the Canadian government’s quiet call for a peaceful resolution isn’t the strong voice of support some Hong Kongese here want to hear.

“They should do something, because Canada has a lot of people from Hong Kong. The Canadian government should be one of the forces to push the Chinese government and Hong Kong to do democracy,” said University of Waterloo student Ian Chui.

Chui was among thousands of protesters that held demonstrations in Toronto, Vancouver, Calgary, and other cities across Canada. They are standing in solidarity with protesters in Hong Kong who took to the streets after the Chinese regime ruled in August that it would restrict who could run in the 2017 election for Hong Kong’s Chief Executive.

While China regularly sees large-scale protests over a myriad of issues—including environmental degradation, corruption, forced eviction, and abuse of power—the regime is able to quash them quickly and keep such events from being reported.

That’s not the case in Hong Kong, and that has many China watchers wondering how far current Chinese leader Xi Jinping will go to quash the protests.

Xi has staked his legacy on being a strong leader capable of imposing his vision on China. He has worked to gain an iron grip on a Chinese Communist Party that is wracked by infighting and terrified of popular revolt.

As it stands now, Canada has given Xi little cause for concern. To date, the Harper government has been notably quiet about the protests or the police response.

The protests began in August and grew to an occupy-style sit in that was met with a police crackdown on Sunday, Sept. 28. Images of protesters shielding themselves from tear gas and pepper spray with umbrellas have given the protest the moniker “Umbrella Revolution.”

It’s a pivotal moment for Hong Kong says Greg Autry, an author, professor, and senior economist with the Coalition for a Prosperous America. He’s worried that the relative silence of western countries does not bode well for the city.

“I believe they need to lay out some explicit consequences that the Xi Jinping regime would face if they were to use violence against the protesters.”

Autry said Harper has been particularly timid regarding police violence in Hong Kong.

“You can see the communist regime has failed to honour their treaty commitment with the U.K. over Hong Kong’s Basic Law,” he said.

“There is no reason to believe they will honour any bilateral agreement they sign with any government.” That includes the recently ratified Canada-China investment treaty, said Autry.

Canada’s silence throughout that gradual erosion of rights in Hong Kong since the 1997 handover has been disappointing, Autry added.

“They passively approved the erosion of the Basic Law. We’ve learned over and over with totalitarian regimes: if you don’t stand up to them immediately, they continue to behave as if they have the approval of other governments to proceed.”

Even after China decided to restrict the nominations for Hong Kong’s elections to its chosen candidates, some MPs attended events last week commemorating the Chinese Communist Party’s rise to power in China. It’s a move that would be unthinkable if Hong Kong were Ukraine and those events were commemorating the rise of the Soviet Union.

But Canada has a complicated relationship with China, and Harper has faced a powerful China lobby calling for stronger trade ties.

So far the New Democrats, Liberals, and Conservatives have followed basically the same line. They’ve made quiet calls on the Chinese regime to honour the Basic Law constitutional framework that China and the U.K. signed in 1997. The Basic Law outlines the one country, two systems structure that gives Hong Kong the freedoms it is accustomed to from British rule, and was supposed to guarantee real democratic elections for the Chief Executive in 2017.

The Department of Foreign Affairs has yet to post a statement to its website regarding the protests, though Minister John Baird tweeted on the topic.

“Canada supports continued freedom of speech and prosperity under the rule of law,” tweeted Baird.

Baird’s press secretary Adam Hodge told Epoch Times that the department is concerned about the worsening tensions in Hong Kong.

“Canada stands with the democratic aspirations of the Hong Kong people. The rule of law and the good governance of Hong Kong are truly valued by Canada,” Hodge said.

Those statements come in drips and dribbles—far from the loud calls of support Hong Kongese living in Canada are hoping for, according to Chui.

He said many Hong Kongese are worried about a Tiananmen Square massacre type of response.

“The police have already used tear gas, rubber bullets, and pepper spray. We feel like it is already violent,” he said.

“Hong Kongese are the most peaceful protesters in the world. We have no weapons, we don’t put anything on fire,” he said.

But Autry is doubtful Chinese leader Xi would have any success violently suppressing protests as his predecessors did in Tiananmen Square in 1989.

Hong Kong is a warren of subways, highways, and skyscrapers, whereas Tiananmen was an open square where protesters were penned in by government buildings.

“It would be really difficult and because it is a dense urban environment—the civilian casualties would be horrific.”

That’s little comfort though, given that the situation in Hong Kong has deteriorated steadily since the Chinese regime regained control. There have been several massive protests against the regime’s moves to restrict rights and freedoms in the city since 1997.

Autry notes that besides a large population of Hong Kongese, Canada has another tie to the island city. Canada took the brunt of casualties defending Hong Kong during WWII. Over 1,000 Canadians died for Hong Kong’s freedoms.