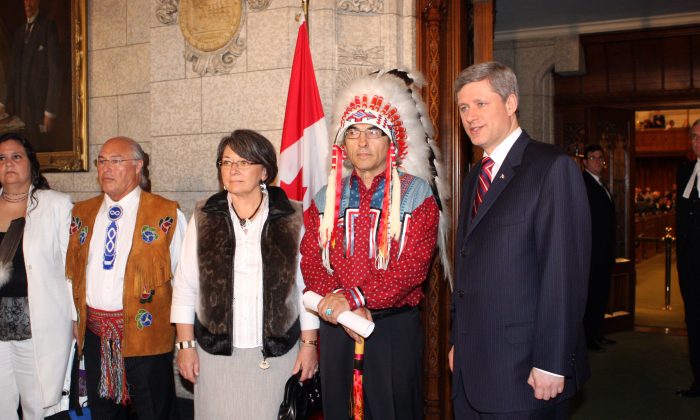 It’s been five years since Prime Minister Stephen Harper made his historic apology for the lasting and damaging impact of residential schools and the stain they left on Canada’s history.

“There is no place in Canada for the attitudes that inspired the Indian Residential Schools system to ever prevail again.”

Harper said the Indian Residential Schools Settlement Agreement, the cornerstone of which is the Truth and Reconciliation Commission, “gives us a new beginning and an opportunity to move forward together in partnership.”

But in the years since the apology, the relationship between First Nations and the government has not fundamentally changed, said Assembly of First Nations (AFN) National Chief Shawn Atleo, citing “colonial notions” and “imposed legislation” as barriers to progress.

“There is a growing frustration among First Nations across the country with lack of action and lack of commitment on the part of the Government of Canada to work in real partnership with our peoples and governments,” said Atleo in a statement marking the anniversary.

“We must break the pattern once and for all. Actions must match words. Our people are calling for a true and collective commitment to reconciliation that respects First Nations peoples and rights as the way forward to a stronger Canada.”

For more than a century, over 150,000 aboriginal children were separated from their families and placed in residential schools in a policy of assimilation, the aim being to “kill the Indian in the child.” Many students were physically, emotionally, and sexually abused. Some died while in the residential school system, and many others never returned home.

Despite the formal apology and great hopes for change, relations remain tense, manifesting in the Idle No More movement and seemingly continuous indications that First Nations rights have a long way to go.

Last month, for example, a federal report on First Nations education found a “significant gap” in educational opportunities between First Nation and other Canadian students.

The report also found that First Nations schools have lower quality teaching, an inferior curriculum, and a lack of services for children with special needs. Without further investment, it said, these problems could worsen, compounded by expected population spikes on reserves.

“By every measure, be it respect for treaty and land rights, levels of poverty, average life spans, violence against women and girls, dramatically disproportionate levels of arrest and incarceration, or access to government services such as housing, health care, education, water, and child protection, Indigenous peoples across Canada continue to face a grave human rights crisis,” said an Amnesty International summary of the three reports.

Ottawa largely rejected or downplayed the U.N.’s concerns. In addition, the government is currently fighting the AFN and other groups in a bid to keep a high-stakes case over First Nations child welfare out of the courts.

But Bernard Valcourt, minister of Aboriginal Affairs and Northern Development, says progress has been made over the past five years and will continue, despite challenges.

“We acknowledge that we must forge a new relationship, one that is based on an appreciation of our shared history, a respect for each other’s cultures and traditions, and an honest desire to move forward together with a renewed understanding that Canada’s future will be stronger if we build it together,” he said in a statement marking the anniversary of the apology.

“Our Government will continue to honour its commitment to these principles, and build on the concrete progress we have made over the last five years to ensure First Nations, Métis, and Inuit are full participants in building a stronger country for all Canadians.”

Atleo said First Nations are taking the lead in finding solutions, but will require government support to see them through.

“In spite of challenges, First Nations are implementing First Nation-driven solutions based on their rights and their Treaties. This work is aimed at supporting and strengthening our governments, building our economies, providing fair and equitable education and health systems for our kids and families in ways that honour our heritage and languages, and ensuring our citizens and communities are safe and secure,” he said.

“We must see concrete action by government to support these efforts now.”