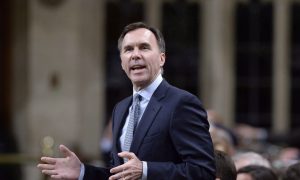 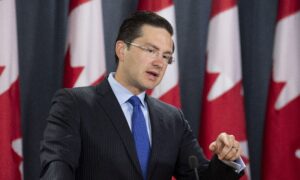 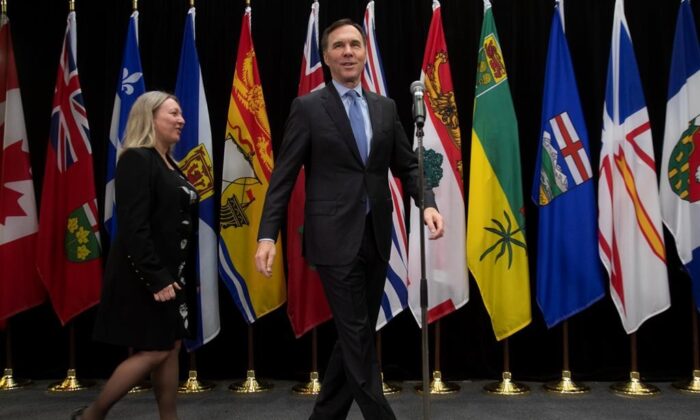 Minister of Finance Bill Morneau and Associate Minister of Finance Minister Mona Fortier step up to the microphone to speak with the media before attending a meeting of federal and provincial finance ministers on Dec. 17, 2019 in Ottawa. (The Canadian Press/Adrian Wyld)
Canada

OTTAWA—Provincial finance ministers appeared divided into two camps going into a Dec. 17 meeting in Ottawa with federal Finance Minister Bill Morneau, who indicated that few concrete decisions would be made at the gathering.

Ministers from Alberta and Newfoundland and Labrador declared the need to expand the fiscal stabilization program as their top priority in talks with the federal finance minister.

“We believe that the fiscal stabilization program needs fundamental change in order to deliver on its purposes,” Travis Toews, the Alberta finance minister, declared on his way into the meeting.

“Our No. 1 priority is to request that the caps be lifted.”

The fiscal stabilization program is easier to change than the more complex equalization program, and amendments could be worth billions to provinces whose finances have been hit by low oil prices.

The stabilization program provides financial assistance to provinces facing a year−over−year decline in its non−resource revenues, but the money available to eligible provinces is capped at just $60 per resident.

Toews said those rules left Alberta to pretty much fend for itself when it was facing a budget deficit resulting from cratering oil prices.

Prior to attending a working dinner on Dec. 16 with his provincial and territorial counterparts, Morneau acknowledged the program, which has not changed since 1995, needs some adjustments to how stabilization payments are calculated.

“The calculations are antiquated and no longer reflect the priorities of provinces, especially resource−producing provinces,” said Newfoundland and Labrador Finance Minister Tom Osborne.

Meanwhile finance ministers from some other provinces, including Manitoba, Prince Edward Island, and Quebec, said increasing federal transfers for health care was their most pressing concern.

For his part, Morneau said it came as no surprise that the provinces would be requesting more funding at their meeting. He suggested, however, that the Trudeau government would not be making any near−term commitments to additional spending on the stabilization program.

“I think it’s important for us to listen to the issues that we hear today and to take that back, and consider how we can look at the program in a way to make sure it continues to be effective,” Morneau told reporters.