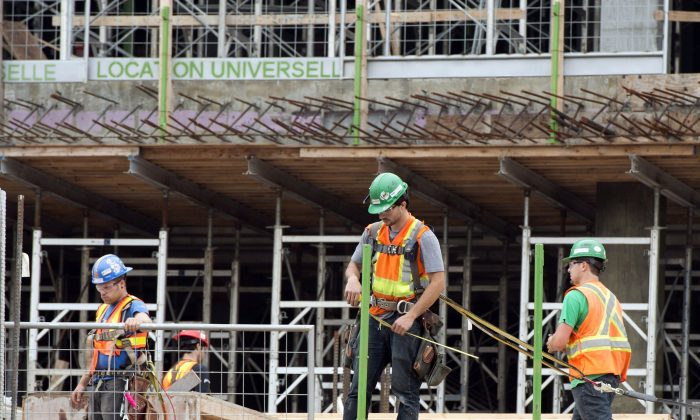 Construction workers return to work at the site of Montreal’s CHUM superhospital July 2, 2013, after being legislated back to work to end their two-week strike. GDP bounced back in July mainly due to a recovery from the dampening effects in June of flooding in Alberta and the construction strike in Quebec. (The Canadian Press/Ryan Remiorz)
Canada

Canada’s gross domestic product rebounded to grow by a better-than-expected 0.6 percent in July after a fall of 0.5 percent in June, according to Statistics Canada on Monday. The July month-to-month percent change is the highest so far in 2013, but will fall shy of the Bank of Canada’s estimates.

The about-face from June is mainly due to a recovery from the GDP-depressing effects of flooding in Alberta and a construction strike in Quebec. Accordingly, construction increased 1.9 percent, and manufacturing increased 1.1 percent.

Behind the scenes though, the recent pickup in housing sales led to a non-negligible 0.8 percent rise in the output of real estate agents and brokers. This marks an increase for the fifth consecutive month in this category.

August saw national home sales increase 2.8 percent, according to data released from the Canadian Real Estate Association on Sept. 16. This bodes well for the August GDP report, but beyond that home sales movement will likely depend on the direction of mortgage rates.

The Bank of Canada had forecast third quarter GDP growth of 3.8 percent in its July monetary policy report. On Tuesday, senior deputy dovernor Tiff Macklem revised it lower to 2.0 to 2.5 percent. Many Bay Street firms see Q3 growth in Canada on average coming in line with the bank’s revised forecast.

Shortly after the release of the July GDP report, CIBC confirmed their call for third quarter GDP growth of 2.7 percent. National Bank expects “around 2 percent.”

A Toronto Dominion note puts it “in the ballpark of 2.2 percent.” Royal Bank didn’t get the bounce in July GDP that they were expecting and thus “suggests Q3 growth closer to 3 percent relative to our current forecasted increase of 3.4 percent.”

According to Bank of Montreal, “The bigger story here is that underlying growth is still just quietly grinding along at a modest pace of between 1.5 percent and 2.0 percent.”

In effect, for GDP growth to reach the 3.8 percent level, National Bank estimates that monthly GDP would need to grow near 0.6 percent in both August and September, which would be a “miracle.”

While the rebound in July was expected, and expectations were bettered slightly, the economy is hardly growing at a rate that would create inflationary forces or close the output gap sooner than forecast. Rate hikes from the Bank of Canada are likely still about a year away.