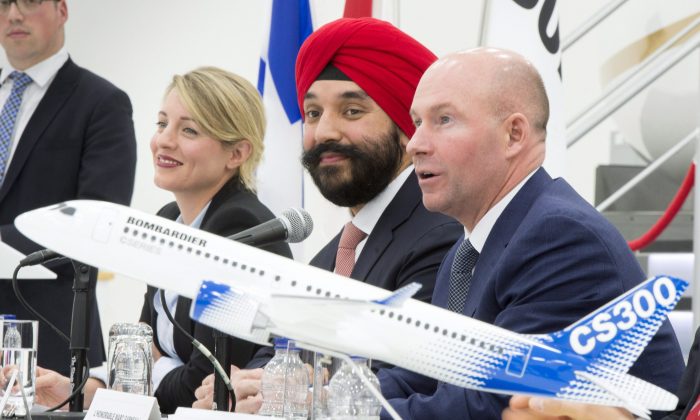 MONTREAL—The federal government says it will provide $372.5 million in interest-free loans to Bombardier, a move that elicited criticism even though it is far less than the transportation giant originally sought more than a year ago.

The money will be handed out in instalments over four years to support the Global 7000 and CSeries aircraft projects, the government said.

Several federal cabinet ministers made the announcement Tuesday, Feb. 7, at a Bombardier facility in Montreal.

“It started out on a piece of paper and then became the best plane in the world in its class. This is something we should all be proud about.”

We can now think to the future.
— Alain Bellemare, CEO, Bombardier

Innovation Minister Navdeep Bains said the money will preserve thousands of high-paying technology jobs in Ontario where the Global will be assembled and Quebec where it is completed and the CSeries is built.

“The investment I’m announcing today is the right solution for the time and in terms of innovation, jobs, and long-term competitiveness for the company,” he said.

Last year, Bombardier received a US$1-billion investment for the CSeries passenger jet program from the Quebec government in exchange for a 49.5 percent stake. The company also sold a 30 percent stake in its railway division to pension fund manager Caisse de depot for US$1.5 billion.

Bombardier had also been appealing to Ottawa for US$1 billion in assistance since late 2015.

The company will repay the loans through royalties on each aircraft sold. It’s the same system used when Ottawa provided $350 million for the CSeries in 2005.

From a fiscal perspective, providing loans to Bombardier allows Ottawa to offer assistance without hurting the fiscal balance, as they would be recorded on the balance sheet as an asset.

Interim Conservative leader Rona Ambrose said in a statement that she is “very concerned” about this agreement and its implications for taxpayers.

“Jobs aren’t created by handouts to a favoured company, especially when that company publicly said it didn’t need the money. The way to encourage investment and job creation is not through handouts, but rather through lower taxes and getting government out of the way,” said Ambrose.

Bombardier has announced job cuts totalling 14,500 positions over the last two years in an effort to regain its financial footing.

As of late November, the company received at least 360 firm orders for the CSeries jets.

“Our liquidity position is very secure,” Bellemare said. “We can now think to the future.”