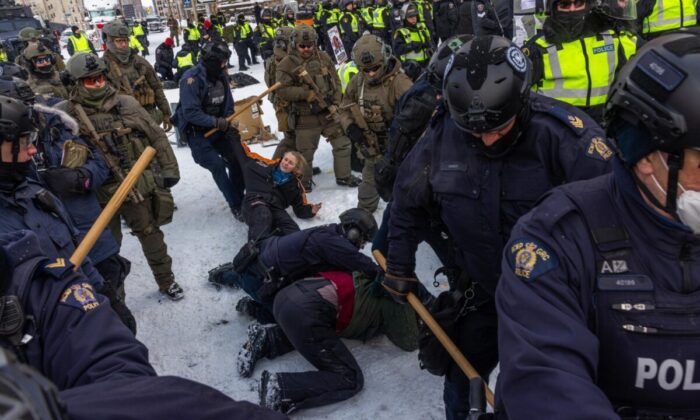 Are we there yet? Can Canada under the current “state of emergency” (how many states of emergency can legislators declare in two years?) be officially categorized as the latest in the dwindling and discredited ranks of the third world’s police states?

The very cornerstone of democracy is the right of every citizen to disagree with, and to express his disagreement with, his government. That is, in essence, what distinguishes modern democracy from the tyrannies of antiquity, the divine-right monarchies of the Middle Ages, and the fascist and communist totalitarian utopias of the previous century.

But political dissent is now a crime in Canada. Under the Emergencies Act, the Trudeau government is empowered to seize the bank accounts of anyone—permanently revoking his credit, rendering him destitute, homeless, and unemployable—who has ventilated, or continues to ventilate, any opinion about vaccine mandates at variance with the regime. (If you’re one of hundreds of thousands of Canadians who have contributed financially to the Freedom Convoy, you may already be on Prime Minister Justin Trudeau’s enemies list, and having done so, you are ipso facto in violation of the Act’s “financing terrorism” clause.)

In Ottawa and every other city throughout Canada, the most basic fundament of common law has also been annulled. Peaceful protest can lead to summary arrest, without any of the ordinary protections of due process. Indeed, the mere suspicion of being in penumbral sympathy with those who oppose Trudeau’s vaccine mandates is sufficient pretext for the police to knock on your door at midnight and haul you away.

By the time of this writing, Ottawa’s police have already incarcerated hundreds of protesters. As in the People’s Republic of China, Cuba, North Korea, and Maduro’s Venezuela, Canada’s jail population, for the first time in its history, has been augmented by what can only be described as political prisoners, i.e., those who have been incarcerated for no other “crime” than holding political beliefs that aren’t approved by “the Party” or “the State.”

For the past three weeks in Ottawa, no acts of violence have been committed, no police cruisers set on fire, no shops broken into or looted, no businesses destroyed, no city blocks razed to the ground, no government buildings occupied or autonomous zones declared, no national transportation lines held hostage. All of the above characterized the riotous anti-G20, anti-pipeline, or Black Lives Matter (BLM) demonstrations that Trudeau failed to call “lawless,” “violent,” or “insurrectionist,” and against whose palpable threats to our democracy and economy he declined to invoke the Emergencies Act; on the contrary, in solidarity with their “just concerns,” as he called them, Trudeau theatrically genuflected (literally, in the case of the BLM demonstration in Ottawa in 2020).

In Ottawa 2022, by contrast, the protesters have been waving Canadian flags, singing the national anthem, praying the “Our Father,” feeding the homeless, and cleaning up their own refuse. The inescapable conclusion is that we have now officially entered the Alice in Wonderland phase of politics, in which the leaders of the world see it through a looking glass that exactly reverses everything within it, and reflects it back with perfect, albeit fearful symmetry. Every lie that the Trudeau regime has ventilated about the truckers’ protests—“fringe,” “violent,” “extremist,” “insurrectionist”—would have been a veridical description of the BLM, Antifa, or anti-pipeline demonstrations that it has consistently and sycophantically praised; and every prettification with which it has bedaubed its encomia of the latter—“peaceful,” “joyous,” “grassroots,” “democratic”—is apodictically true of the protest it is now scurrilously vilifying.

It’s in order to quell constitutionally protected and peaceful protests against Trudeau’s unconstitutional and illegal COVID mandates that the Ottawa police are now fearlessly laying siege to the truckers’ bouncy castles, soup kitchens, and other heavily fortified installations, and beating their metal stanchions against plexiglass shields as they heroically advance in military formation against massively outnumbered and unarmed foes.

On Friday, a unit of Ottawa’s mounted police waded into a crowd and trampled several of the unsuspecting under equine feet. Another brave officer attacked a willowy female reporter (“misogyny,” anyone?) from Rebel News, allegedly beating her three times with his stanchion and shooting an exploding tear-gas canister at her leg. (In fact, for two years now, the regime has been targeting and arresting the reporters of Rebel News—for the crime of covering the protests and thereby practicing journalism—making a mockery of another ancient pillar of democracy, that is, a free press.) A week before Trudeau’s declaration of martial law (aka the “Emergencies Act”), Ottawa’s finest surrounded the car of a 78-year-old grandfather, and wrestled him violently to the ground, for honking in support of the truckers.

In countless scenes reminiscent of Hollywood satires on the farcical brutality of banana-republic caudillos, Canada’s supposedly independent police force has turned itself into a palace guard of fascistic goons enforcing the will of the regime against an ungrateful subject population. But no member of the progressive club of European and North American democratic leaders has broken ranks with Trudeau to condemn his repressive measures—the first and only real violence of these protests—as they reflexively do whenever they occur in far-away Russia, China, or Latin America.

Nor have the members of the Loyal Opposition, except in the most pusillanimous terms. Instead of outrage, the federal Conservatives, having been compliant with his medical tyranny from the beginning, are now finally accusing the prime minister of “overreach” (a masterstroke of understatement). When Trudeau calls the protesters “Nazis,” the Conservatives plead with him not to be so “divisive,” rather than standing up indignantly in Parliament and brandishing the voluminous video evidence that demonstrates that he is, plainly and simply, a liar; then explaining to him, slowly so that he understands, that the swastika his CBC big brothers were able to catch on film was there to make the point that in compelling his citizens to inject an experimental vaccine into their bodies, Trudeau is violating the Nuremberg Code.

Over the past two years, every branch of government and stratum of society—legislative, judicial, police, Trudeau’s lapdog media, the colleges of physicians—has made itself the servile instrument of his regime, disseminating its medical propaganda, censoring dissident medical research, onerously fining and arresting non-compliant citizens—and are now thereby complicit in his coup d’etat. Almost everyone, it seems, has played a role in turning Canada into an international laughingstock—or what would be an international laughingstock were it not for the fact that COVID tyranny is pandemic. An insurrection has certainly taken place in Ottawa: one mounted by Canada’s own government, in which all parties have treacherously conspired.

Harley Price
Follow
Harley Price has taught courses in religion, philosophy, literature, and history at the University of Toronto, U of T’s School of Continuing Studies, and Tyndale University College. He blogs at Priceton.org. His upcoming book, "Give Speech a Chance: Heretical Essays on What You Can't Say, or Even Think," is now available for pre-order at fgfbooks.com.