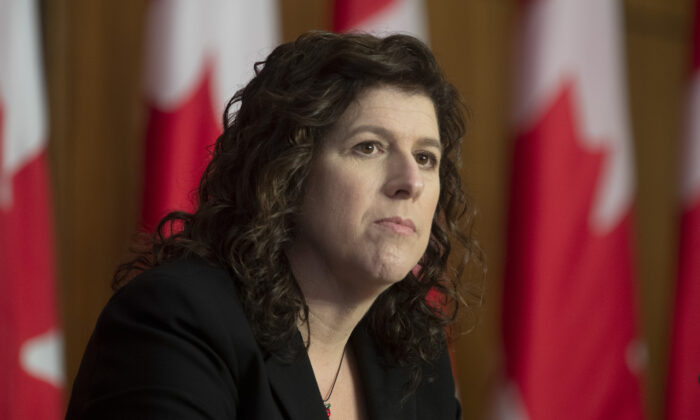 Auditor General Karen Hogan listens to a question during a news conference in Ottawa on May 26, 2021. (The Canadian Press/Adrian Wyld)
Canada

Auditor General Karen Hogan submitted four COVID-19-related reports to the House of Commons on Dec. 9, including one that examines the Public Health Agency of Canada’s (PHAC) enforcement of quarantines and testing for travellers entering Canada.

An earlier audit found that, between May and June 2020, PHAC could not determine if 66 percent of incoming travellers complied with COVID-19 quarantine measures as the agency was unable to track their status. While that number dropped to 37 percent between January and June 2021, the auditor general said the numbers remain troubling.

“Though the Public Health Agency of Canada improved its results, this is not a success story,” Hogan said in a Dec. 9 press release.

“The Agency’s inability to confirm whether more than a third [of] travellers complied with quarantine orders remains a significant problem.”

“The Agency was either missing or unable to match 30 percent of COVID-19 test results to incoming travellers from February to June 2021,” the release says.

“In addition, because the Agency did not have records of stay for 75 percent of travellers who flew into Canada, it did not know whether those who were required to quarantine at government authorized hotels had complied.”

These failures are a stark contrast to the $614 million PHAC spent from March 2020 to August 2021 on implementing the border measures, including $65 million to enforce 14-day quarantine orders, $342 million for COVID-testing orders, $7 million to operate government-authorized hotels, and $200 million to house incoming travellers at designated quarantine facilities.

Following the release of the auditor general’s report on Dec. 9, Health Minister Jean-Yves Duclos defended PHAC’s efforts to improve its tracking system, saying officials have made over 7 million compliance verification calls and made more than 500,000 visits for returning travellers to confirm that they were observing in-home quarantine.

However, he said the government’s response “was far from perfect. We can and must do better.”

Hogan said that as travel increases and new variants emerge, PHAC “needs to improve the way it manages and enforces border control measures that are meant to limit the introduction of the COVID-19 virus and its variants into Canada.”