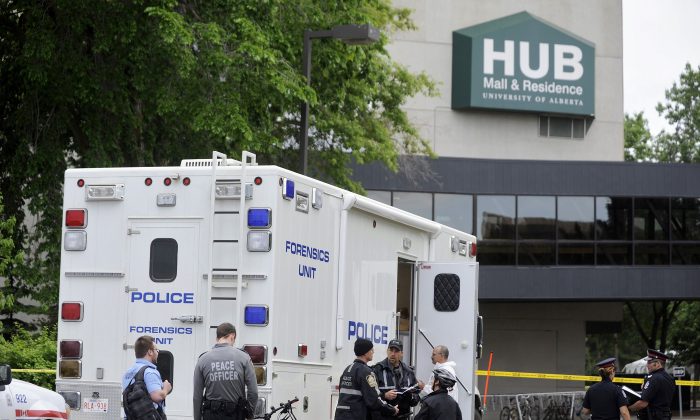 Police investigate the scene of an armoured car robbery at the University of Alberta in Edmonton on June 15, 2012, that left three people dead. Canada’s largest union says better safety standards are needed in the armoured vehicle industry. (REUTERS/Dan Riedlhuber)
Canada

A brazen attack on two armoured car guards in a Montreal suburb last week that saw thieves escape with over $400,000 has sparked renewed calls for improved safety standards in the industry.

The incident, in which two Garda security workers were attacked with pepper spray, is the fourth high-profile armoured car robbery in the past year, including one in February in Toronto that ended in a shootout.

Since 2000 there have been 70 attacks on armoured cars, which resulted in three fatalities and two serious injuries.

“How many more robberies will it take before our legislators take these safety concerns seriously? These workers are being put in dangerous situations every day, and that can and must be addressed,” said Unifor national president Jerry Dias.

The union has previously called for a national task force to look into safety standards in the industry and an end to two-person crews (aka “one-off” crews), which are the most frequently attacked—amounting to 70 percent of armoured car robberies in the last 10 years.

“The diminished ability of a ‘one-off’ crew to monitor for the risk of exposure to the known hazard of assault and injury during a robbery attempt while servicing a front loading ATM machine and during travel to and from the truck constitutes a danger,” Tomlin said in his report.

Canada has a patchwork of “out-of-date and ineffective regulations” governing the armoured car sector and falls behind other jurisdictions around the world, says Unifor, which met with federal director general of policing policy Mark Potter in June to discuss safety concerns.

The union suggests Canada could learn from other countries, such as Australia and those in the European Union, that have highly developed standards in employee training, vehicle specifications, crew complements, and safety equipment requirements.

In Canada’s deadliest heist, three armoured car guards were shot and killed at a routine cash delivery at the University of Alberta in 2012 by their co-worker, trainee guard Travis Baumgartner, who then attempted to flee the country with over $330,000.

Last year Baumgartner was given an unprecedented sentence of life in prison with no chance of parole for 40 years. In June, two of the victims’ families sued Baumgartner and armoured car company G4S Cash Solutions.

The wrongful death lawsuit alleges that G4S failed the victims Eddie Rejano and Brian Ilesic because the company didn’t ensure their safety and failed to adequately screen Baumgartner.

In a letter to Public Safety Minister Steven Blaney last September, Dias blamed the industry for cutting corners on safety and security in a push to drive down prices in the face of increasing competition.

“Facing danger has always been the backdrop for this industry, but standards are weakening as new entrants to the industry and established firms are engaging in heightened price competition on the basis of lowered security standards. The result is higher risk of gun crime through armed robbery and the provision of easier targets for organized crime,” Dias wrote.

Rather than random attacks or “inside jobs,” the overwhelming majority of armoured car robberies are thought to involve organized crime: street gangs, biker gangs, and the Mafia. Unifor estimates that successful robberies have funnelled more than $60 million to organized crime since 2000.