The African Djembe Brings Everyone Together
0 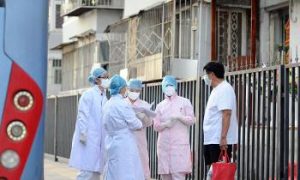 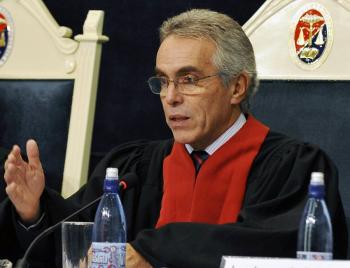 DOS ERRES TRIAL: Judge Diego Garcia Sayan of the Inter American Court of Human Rights speaks on July 14, 2009, in La Paz during a session on the case of the 1982 massacre of 250 indigenous people in Dos Erres, Guatemala.(Aizar Raldes/AFP/Getty Images)
US

By Joan Delaney
Print
On Dec. 6, 1982, a squad of Guatemalan army special forces commandos entered the community of Dos Erres in northern Guatemala. By the time they left two days later, more than 250 men, women, and children had been massacred and the entire village razed to the ground.

Almost three decades later, Jorge Vinicio Sosa Orantes, 1 of 17 men accused of taking part in the infamous massacre, is being detained in Calgary, Canada, in relation to charges of immigration fraud in the United States.

Sosa, who holds Canadian and U.S. citizenship, was picked up by authorities on Jan. 18 on charges that he lied on his U.S. citizenship application. The master karate instructor made a brief court appearance in Calgary on Jan. 17, where a bail hearing was set for Feb. 23.

Sosa, 52, could be extradited to either the United States or Guatemala, where an arrest warrant for murder was issued for him 17 years ago.

With the Dos Erres massacre case finally making progress in Guatemala after years of legal wrangling, Lawyers Without Borders Canada (LWBC) says this is an opportune time to ensure that Sosa be brought to trial for the crimes against humanity he allegedly committed.

“Really what Canada has to do is to find the best place for him to effectively be brought to justice,” says Pascal Paradis, executive director of LWBC.

“The gravity of the accusations against Sosa warrants Canada to really look at it very closely and assess the situation very seriously before taking any course of action. In the end, Canada has to make sure that the decision it’s making will allow this person to face justice.”

A case is also in the process of being initiated against Sosa in Spain, a jurisdiction in which the victims’ families believe he can effectively be brought to trial for crimes against humanity, says Paradis.

“In Spain there is a particular law specifically for these types of crimes and these kinds of prosecution. Same thing in Canada.”

Paradis says that while the U.S. immigration fraud charges are important, “for us the crimes against humanity charges—the massacre itself—is more important, and we wonder if in the U.S. he could effectively be brought to trial for those charges.”

However, he adds that there is a possibility the United States could decide to extradite Sosa to Guatemala.

Over 200,000 people were killed or disappeared during Guatemala’s vicious 36-year civil war, which officially ended in 1996. Approximately 650 massacres occurred in the Central American country during that period—Dos Erres being one of the most brutal.

Members of an elite unit of the Guatemalan armed forces known as the Kabiles killed those in the indigenous community by clubbing them with sledgehammers, among other methods, and throwing them into a well, some while still alive. The girls and women were raped and also dumped in the well.

“Some people’s babies were killed bare-handed. It is believed that the logic behind that was so that bullets could be saved,” says Paradis.

The commandos ostensibly entered the village to search for guerrilla fighters who had attacked a military convoy. But according to Amnesty International, an army intelligence commander ordered the massacre in order to cover up the rape of a village woman earlier that day by another officer.

The Los Angeles Times reports that U.S. Justice Department officials are seeking Sosa’s extradition back to California, where he has most recently been a resident.

Thom Mrozek, spokesman for the U.S. attorney’s office in Los Angeles, told the Times that if convicted on the immigration fraud charges, Sosa could receive a maximum of 15 years in prison, and also be stripped of his U.S. citizenship, and deported.

Regarding accusations that he is guilty of war crimes, Sosa’s daughter, Christina Sosa, told the LA Times that her father is being used as a scapegoat while former Guatemalan President Gen. Efrain Rios Montt—who allegedly ordered the Dos Erres killings—still serves in the country’s government.

“Other people are paying for his wrongdoing,” she said. “Everybody has been portraying my father as this monster. They haven’t even heard his side of the story. The fact is, he was just a young soldier when this happened.”

In 2000, then-President Alfonso Portillo publicly accepted responsibility for the Dos Erres massacre, and families of the victims received about $1.82 million in compensation.

However, an ongoing investigation formally opened in Guatemala in 1994 has not resulted in any convictions. With Sosa’s arrest, Lawyers Without Borders hopes that will change.

“Justice has been very slow, so that’s why this case is so important,” says Paradis. “Unfortunately there’s been impunity for too long, and that’s what we’re saying—Canada’s responsibility now is to consider the greatest interests of justice in assessing Sosa Orantes’s situation.”

To that end, two options Canada has are an indictment of Sosa under the Canadian Crimes Against Humanity and War Crimes Act, or extraditing him to a jurisdiction where he can be prosecuted for crimes against humanity.