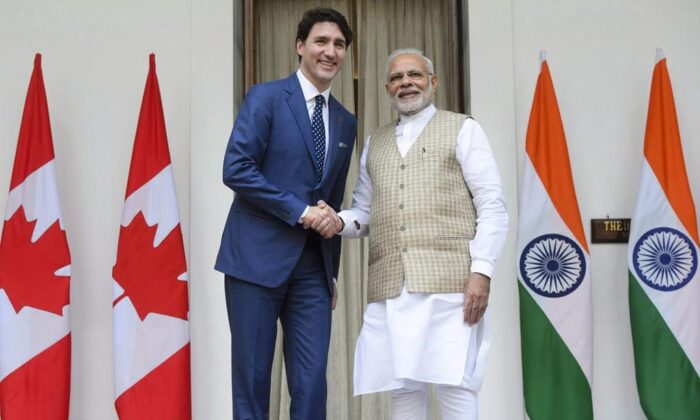 Canada and India can complement each other in trade and defence, analysts say
By Rahul Vaidyanath

The Indo-Pacific is of growing consequence for the democratic free world, but a damning conclusion from pundits is that Canada has neglected the region and become less well-regarded by its countries. In particular, business leaders and foreign policy experts urge Canada to do more to strengthen ties with India, a major player there, something that would be welcomed by the Asian nation.

Ottawa is developing an Indo-Pacific strategy—tasked in the foreign affairs minister’s mandate letter— to create stronger regional partnerships and to support a free and open Indo-Pacific.

The G7 and other international bodies have been condemning China’s belligerence in the Indo-Pacific, where the immediate threat is against Taiwan. China began live-fire military exercises off the coast of the self-ruled island on Aug. 4 in response to U.S. House Speaker Nancy Pelosi’s visit the two days prior. Taiwan’s foreign minister on Aug. 9 said that Beijing is preparing for “invasion.”

“Simply put, there is no path to a successful Indo-Pacific strategy without going through India,” said Business Council of Canada (BCC) President and CEO Goldy Hyder in an Aug. 4 statement introducing a new report on building economic ties with India.

The report, released by the BCC along with the Canada-India Business Council, mentions some of Canada’s foreign policy shortcomings, whose consequences are becoming more tangible.

“U.S. President Joe Biden recently launched the Indo-Pacific Economic Framework for Prosperity, an effort to counter China’s growing influence in the region. A dozen other countries, including India, Japan, and Australia, have joined the framework—but not Canada,” states the report.

Other Indo-Pacific alliances that Canada has been excluded from include AUKUS, a nuclear submarine pact between Australia, the United Kingdom, and the United States; and the “Quad”—the Quadrilateral Security Dialogue between the United States, Japan, India, and Australia.

Canada has to rebuild its credibility in the region, said Stephen Nagy, a fellow at the Canadian Global Affairs Institute and professor at the International Christian University in Tokyo, in a July 4 op-ed in the Hub.

“Getting Canadian buy-in will require leaders to succinctly and simplistically explain why the region is important for Canadians. For example, outside of North America, the Indo-Pacific region presents the largest economic opportunity for Canadians,” he wrote.

With respect to India in particular, many western leaders recognize that building alliances between democracies in the Indo-Pacific is the foundation for defence and security policy and economic opportunity, but “Canada is entirely missing in action,” said Shuvaloy Majumdar, head of the Foreign Policy & National Security Program at the Macdonald-Laurier Institute, and Sameer Patil, senior fellow at India’s Observer Research Foundation, in a July 11 National Post op-ed.

The report by the two business councils suggests that India appears to be on a similar trajectory as that of China 20 years ago—it’s projected to be the world’s fastest-growing large economy. Its population is on course to overtake that of China by 2027, and its economy is poised to become the third-largest by 2030, the report said. India is currently the world’s sixth-largest economy.

The report points out that over the years, Canada has lost market share in India even though trade between the two nations has been growing, as India has been trading more with other countries.

Canada and India are working on a free-trade agreement after India signalled in 2021 that it would be more open to international trade. The report noted that the United Kingdom and Australia are already trying to get a trade deal done with India.

The senior Indian official said, “It’s the world’s turn now to start taking a greater interest in India, as our markets have become large and prosperous and offer unprecedented opportunity for growth to anyone who’s looking at the Indian market.”

Analysts of the Canada-India economic relationship say the two countries can complement each other.

“Canada needs what India has, including a rapidly growing population of middle-class consumers and a young, IT-literate workforce. In turn, India needs much of what we have: energy, technology, agri-food products, fertilizer, various other natural resources, investment capital, plus engineering and business know-how,” the report said.

Majumdar and Patil highlight the complementary relationship on the defence and security front.

“Canadian companies could benefit from the opportunities from a major market like India and take advantage of its innovations. And India could benefit in having Canada serve as a supplier of trustworthy, high-quality defence equipment. Both nations would benefit from collaborating on defence technology,” they said.

The federal government on June 9 announced the formation of an Indo-Pacific Advisory Committee to give independent perspectives and recommendations on the strategy. Kasi Rao, who recently was president and CEO of the Canada-India Business Council, is one of the members.

Global Affairs Canada did not respond to The Epoch Times’ request for comment regarding the Indo-Pacific strategy or its advisory committee. Prime Minister Justin Trudeau said on Aug. 8 in a statement marking ASEAN Day that the government “continues the work to develop a new, comprehensive Indo-Pacific strategy.”