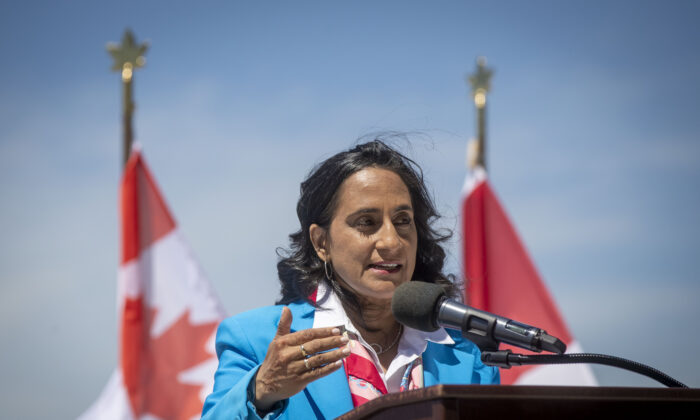 Defence Minister Anita Anand speaks during an announcement at Canadian Forces Base Trenton in Trenton, Ont., on June 20, 2022. (The Canadian Press/Lars Hagberg)
Canada

“There is no justification to use a visit as a pretext for aggressive military activity in the Taiwan Strait,” Anand said in an interview with CBC Radio’s The House, reported on Aug. 6.

“It is routine for legislators from our countries to travel internationally, and China’s escalatory response simply risks increasing tensions and destabilizing the region.”

Anand’s comments came a day after Beijing announced on Aug. 5 that it was ending all dialogue with the United States including matters concerning military relations.

“We are concerned by threatening actions by China,” she said. “We call on China not to unilaterally change the status quo by force in the region and to resolve cross-strait differences by peaceful means.”

The Chinese military exercises began on Aug. 4. So far, the drills have included missile strikes on targets in the seas north and south of the island in an echo of the last major Chinese military drills in 1995 and 1996 aimed at intimidating Taiwan’s leaders and voters.

The communist regime has long considered Taiwan to be a breakaway province, despite the fact that Taiwan is a de facto independent country.

“Canada is deeply concerned by the missiles launched by the People’s Republic of China towards Taiwan and into Japan’s exclusive economic zone,” Joly said.

“This action threatens regional stability and security. We strongly urge the PRC to halt its coercive military and economic actions.”

Taiwan updated on Aug. 6 that the Chinese military exercises appear to simulate an attack on the self-governed island, after multiple Chinese warships and aircraft crossed the median line of the Taiwan Strait.

Taiwan’s army added that it detected four drones that it believed were from the PRC, flying in the vicinity of the offshore county of Kinmen on Aug. 5.

Kinmen, also known as Quemoy, is a group of islands about 10 kilometers east of the Chinese coastal city of Xiamen in Fujian Province in the Taiwan Strait. The Taiwanese said they had fired warning flares in response to the drones.

Taiwan President Tsai Ing-wen said in a tweet on Aug. 5 that her country is ready to respond as needed to China’s threats.

“I call on the international community to support democratic Taiwan & halt any escalation of the regional security situation.”

Anand said Beijing’s move has been an “unnecessary escalation.”

“We are eyes wide open on China,” she said. “We will continue to work towards the safety and security of that region.”