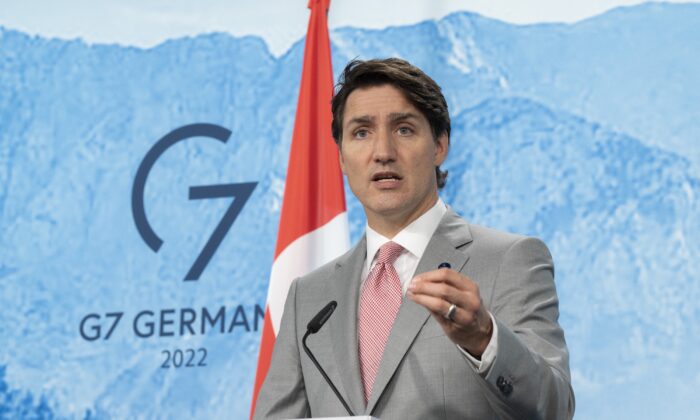 Canada will help Europe reduce its dependency on Russian oil and coal by expanding infrastructure among other measures, Prime Minister Justin Trudeau announced on June 28 at the G7 meeting in Germany.

“Canada, obviously, as an oil and gas producer, is ensuring that in the short term we’re doing what we can to alleviate pressures,” Trudeau said in a press conference.

“We’re also looking in the medium term at expanding some infrastructure, but in a way that hits that medium-term and long-term goal of accelerating transition not just off Russian oil and gas, but off of our global dependence on fossil fuels because of the impacts of climate change.”

The G7 communiqué released after the concluding meeting on June 28 addresses at length the current issue of energy security, fuel prices, and Russia’s ability to sell its hydrocarbons to sustain its economy and the war in Ukraine.

While Western countries have imposed numerous sanctions on Russia, it’s been business as usual for many other countries, with some such as India increasing their purchase of discounted Russian oil.

“We are working to make sure Russia does not exploit its position as an energy producer to profit from its aggression at the expense of vulnerable countries,” says the communiqué.

The G7 says it will address the current market pressures on oil by increasing production in the short term, using energy reserves, and encouraging OPEC countries to increase production.

The communiqué also talks of putting a cap on the price of Russian oil.

Trudeau said this is “not just to deprive Putin of the revenue he’s using to continue to wage an illegal war in Ukraine,” but to “put downward pressure on fuel prices around the world.”

The G7 also noted the importance of increased deliveries of Liquified Natural Gas (LNG) to accelerate the phasing out of the dependency on Russian energy, but that it was a “temporary response.”

“In these exceptional circumstances, publicly supported investment in the gas sector can be appropriate as a temporary response, subject to clearly defined national circumstances, and if implemented in a manner consistent with our climate objectives and without creating lock-in effects, for example by ensuring that projects are integrated into national strategies for the development of low-carbon and renewable hydrogen,” says the communiqué.

Trudeau was asked during the press conference if he wants Canada and Germany to strike an LNG deal, but he didn’t answer directly, saying he would continue discussions with German Chancellor Olaf Scholz on how Canada “can be helpful in the short term” while ensuring the transition to “cleaner energy in the medium and long term.”

“The conversations around LNG are centred around the fact that LNG infrastructure is the same type of infrastructure that is going to be needed as we transition towards hydrogen,” he said.

Trudeau also announced new financial support for Ukraine with a $200 million loan to meet its “urgent liquidity needs,” as well as an investment of $150 million for humanitarian development and peace and security support.

Part of that will include agricultural aid, Trudeau said.

“In Canada, our farmers typically face big challenges and have been proven to be inventive and creative. So we’ll bring this expertise to Ukraine to help as much as we can.”

The prime minister also noted new sanctions imposed on over 80 individuals and entities linked to Russia’s invasion, as well as the ban on the import of certain gold products from Russia, in coordination with the U.S., the UK, and Japan.