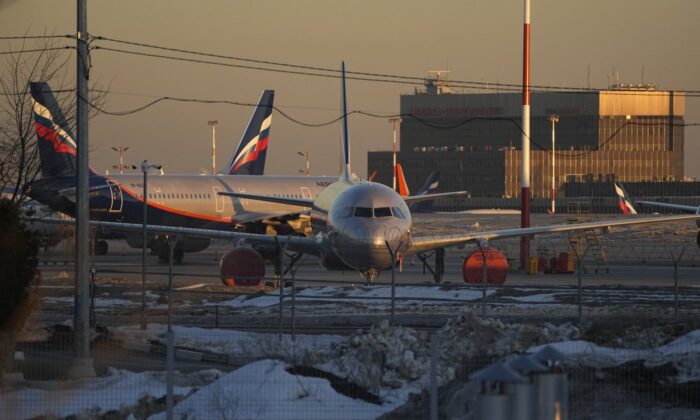 Canada Tightens Ban on Russian Aircraft to Include Humanitarian Flights

The federal government says it has tightened rules for Russian aircraft after a commercial airliner was able to circumvent a ban on entering Canadian airspace late last month by falsely claiming to be a humanitarian flight.

Aeroflot Flight 111 was allowed to traverse Canadian airspace en route from Miami to Moscow on Feb. 27 despite Ottawa having banned all Russian aircraft earlier that day in retaliation for Russia’s invasion of Ukraine.

Officials have previously said Aeroflot 111 was allowed into Canadian airspace because it had registered as a humanitarian flight, a designation that Transport Canada’s head of civil aviation suggested on Monday was deliberately falsified.

While the department is continuing to investigate, Nicholas Robinson told the House of Commons transport committee that officials believed Aeroflot used the humanitarian designation to “circumvent” Canada’s flight ban.

“And in this instance, we don’t see that. … This action by Aeroflot is one that we’re continuing to investigate and have a great deal of disappointment in.”

The decision to let Aeroflot 111 into Canadian airspace because of its humanitarian designation appears to have been the result of confusion between the Liberal government and Nav Canada, which oversees air-traffic control across the country.

Transport Minister Omar Alghabra told committee members that the government’s decision to close Canadian airspace to Russian flights did not include any exemptions for humanitarian flights.

“So that’s why there’s an ongoing investigation about what happened and how it happened,” Alghabra said. “I’ve had conversations with Nav Canada about this.”

But Nav Canada vice-president Ben Girard testified that officials followed the organization’s existing regulations of allowing all humanitarian flights into Canadian airspace, which he said was confirmed in an investigation.

“We were found that we did everything in compliance with published regulations and procedures, and the authority that we had at the time,” he said.

It was only later, Girard said, that the ban was “clarified” to include humanitarian flights from Russia.

“The first (notice) did not have any indication of how to proceed with humanitarian flights,” he said in French. “But since that time, as you say, the (notice) has been clarified.”

Girard also revealed that Nav Canada has no actual power to stop Russian flights from entering Canadian airspace. Rather, violations are reported to Transport Canada, which works with police and the military to respond.

Committee members also heard that about 140 Russian flights were traversing Canadian airspace each week before the government’s ban, with 55 flights rerouted around Canada between Feb. 28 and March 7.

About 75 vessels have also been affected by the closure of Canadian waters to Russian-owned and Russian-flagged ships.

Meanwhile, Alghabra acknowledged that Air Canada and other carriers are dealing with higher costs and longer routes to Asian destinations such as India and South Korea as a result of Russia’s retaliatory closure of its own airspace to Canadian aircraft.

“They’ve had to reroute many or all of their flights that typically would fly over Russia,” he said. “So, for example, direct flights to India now are going through Europe, namely Ireland. And that is adding a little bit extra time and extra cost.”

But he suggested airlines and travellers are overwhelmingly supportive of Canada’s ban on Russian aircraft as part of its effort to punish Moscow over its decision to invade Ukraine.