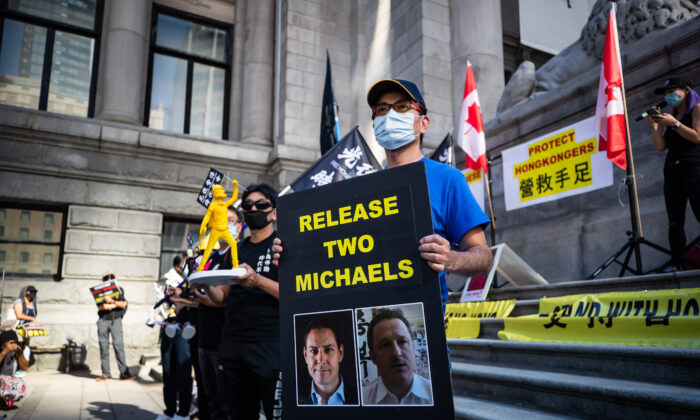 A man holds a sign with images of Michael Kovrig and Michael Spavor who have been detained in China since December 2018, as people gather for a rally in support of Hong Kong democracy, in Vancouver on Aug. 16, 2020. (Darryl Dyck/The Canadian Press)
Canada

Canada Should Sanction Chinese Officials Who Imprisoned Canadians: Author of ‘Claws of the Panda’

Canada should apply sanctions against the Chinese officials involved in the detention of Michael Kovrig and Michael Spavor and encourage other countries to make similar moves to curb Beijing’s aggression, says author Jonathan Manthorpe.

“I think it would be a very sound move to tell Beijing we know who these people are, and we are going to apply sanctions to them,” he said in an interview.

“I think also to encourage our allies who also have Magnitsky legislation to follow our lead as well, and try and contain these people.”

Canada passed its Magnitsky Act in 2017, which gives Ottawa the ability to sanction foreign individuals responsible for gross human rights violations. Examples of sanctions could be barring the targeted individuals from entering Canada, or engaging in financial transactions in Canada or with Canadians outside of Canada.

Last month, a joint letter signed by 62 Canadian MPs, several senators, and more than 20 community groups called on Canada to impose Magnitsky sanctions on Beijing and Hong Kong officials over human rights atrocities in Tibet and Hong Kong, and against Uighur Muslims in Xinjiang. Another group of parliamentarians asked Ottawa to sanction Chinese officials responsible for the persecution of Falun Gong adherents in China.

Manthorpe, author the bestselling book “Claws of the Panda: Beijing’s Campaign of Influence and Intimidation in Canada,” says it’s time to sanction officials for “kidnapping” and detaining Canadians Michael Kovrig and Michael Spavor, as well as use sanctions in other cases of human rights abuse committed by the regime.

He says Beijing’s imprisonment of Kovrig and Spavor in retaliation for Canada’s detainment of Huawei executive Meng Wanzhou, as well as China’s handling of the global pandemic, has fundamentally changed the way many Canadians now view the Chinese Communist Party (CCP) and relations with China.

“Having been fed for so long the idea that somehow at some point the Chinese Communist Party would adopt Canadian civic values, I think the Huawei affair has really woken the Canadian public up to the reality that we share no values with the CCP and never will,” he says.

“That their first instinct when there was a diplomatic problem with Canada was to take hostages shows you, I think very clearly, that we do not share any common values.”

Foreign Affairs Minister Francois-Philippe Champagne met with China’s State Councillor and Foreign Minister Wang Yi in Rome on Aug. 25, raising hopes for the release of the two Canadians. But those hopes were quickly dashed by a statement from Beijing the next day, blaming Canada for the problems in Canada-China relations, and saying Canada was “well aware of the crux of the problem.”

Released last year, “Claws of the Panda” exposes Beijing’s covert efforts to influence Canadian politicians, educational institutions, and business. It was named on the Globe and Mail’s list of “100 books that shaped 2019” and is shortlisted for this year’s Writers’ Trust of Canada’s Shaughnessy Cohen Prize.

It is one of the first books to comprehensively detail how deeply Beijing’s influence has penetrated Canadian political, corporate, and civilian life.

To untangle these threads and put Canada on a stronger footing, the book recommends a “less self-delusional, more courageous, and more intelligent” approach with China.

This includes clearly identifying and articulating Beijing’s multi-level intrusions on Canadian sovereignty as well as publicly criticizing the regime on key issues like Tibet, Taiwan, human rights, and imperial expansion in the South China Sea.

One of the ways the CCP relies on furthering its domestic and foreign aims in Canada and elsewhere is through the multi-layered United Front Work Department. The United Front manages relations with various social, commercial, and academic organizations inside and outside China, with the aim of garnering Party support and furthering the regime’s ambitions.

One of the key operations of the United Front is controlling what the CCP refers to as the “five poisons”: Tibetan and Xinjiang activism, Taiwan independence, the Falun Gong spiritual practice, and the Chinese democracy movement. There are well-documented cases of cyberattacks, harassment, hate propaganda, intimidation of relatives in China, and more, against these groups. The CCP has put a high priority on controlling the thoughts and actions of the nearly 1.8 million Chinese living in Canada.

Manthorpe points to the United Front’s efforts to stir up Party loyalty and manipulate or intimidate the Chinese diaspora outside of the mainland as one of the most urgent areas for Ottawa to push back on.

“I would like to see some really strong actions against United Front operations here,” he says. “It’s quite unconscionable that the Canadian citizens should be threatened in their own homes by an agency of a foreign government. It’s totally unacceptable.”

Manthorpe says his book will soon be translated into Chinese in efforts to attract readers of recent immigrants to Canada from mainland China, who he says are most vulnerable to United Front operatives.

“I was touring around the country and talking to many groups, including some that were predominantly Canadians of Chinese heritage. And I got a consistent message from them saying, Jonathan, please tell mainstream Canada to help us fend off the pressures we feel every day from the United Front operations.”

With reporting by Danielle Zhu