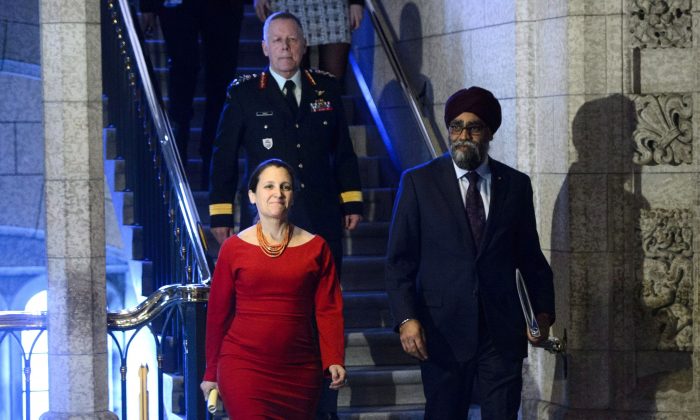 Minister of National Defence Minister Harjit Sajjan, Minister of Foreign Affairs Chrystia Freeland, and Chief of Defence Staff Jonathan Vance arrive to take part in a press conference on Canada's peacekeeping mission to Mali in the foyer of the House of Commons on March 19, 2018. (The Canadian Press/Sean Kilpatrick)
Canada

OTTAWA—Canada’s defence and foreign affairs ministers have confirmed the Liberal government’s plan to send a helicopter contingent to support the United Nations peace force in Mali.

The 12-month commitment to the west African country includes two Chinook helicopters to provide medical evacuations and logistical support and four smaller Griffons to act as armed escorts for the larger transports.

The so-called aviation task force will include support personnel, although a final number has yet to be worked out. A deployment date has also yet to be determined.

Defence Minister Harjit Sajjan and Foreign Affairs Minister Chrystia Freeland say the force will include a marked female presence as the Trudeau government looks to have Canada lead by example in the push to have more women on peacekeeping missions.

The announcement follows a direct request from the U.N. and fulfils Prime Minister Justin Trudeau’s promise in November to make such aircraft available to a future peacekeeping mission.

“Supported by our diplomatic negotiations, I am confident we can help make a real difference in this region through the deployment of the aviation task force,” Freeland told a news conference on Parliament Hill on March 19.

The Mali mission has been a dangerous one for the UN, with about 150 fatalities—which is why the government took the time to carefully consider the situation and decide on the best course of action, Freeland said.

“We are very aware of the complexities and the difficulties of the situation in Mali.”

“Why did it take them so long to make this announcement and is this in Canada’s national interest or is this in the Liberals’ interest?” Bezan said. “Are they making this announcement because of all the criticism they’ve received for breaking the promise of deploying 600 troops and 150 police officers on U.N. missions, when we’re at the lowest levels in history?”

In terms of troop numbers, Canada is currently at a historic low for participation in peacekeeping missions. Canada had a total of 43 peacekeepers deployed around the world at the end of December, the most recent U.N. numbers indicate, down from 62 in November.

The decline, largely the result of a reduction in the number of Canadian police officers deployed to Haiti, means Canada has fewer peacekeepers in the field than at any point since the 1950s.

Fight under Canadian instead of UN command?

Bezan said the Conservatives want to see Canada involved in more peacekeeping, including in Ukraine. But he said it must be in the national interest and in some cases, it may be preferable to fight under Canadian instead of U.N. command.

“We know that this is incredibly dangerous,” he said. “We support our troops and know they are completely capable of doing it, but we are hesitant about putting our troops in harm’s way under U.N. command.”

He said peacekeeping decisions should not be made based on nostalgia about blue helmets.

“There is concern about how we are going to keep the peace when we have insurgencies, terrorism, failed states and multiple different missions going at the same time and no answers of how this is in Canada’s national interest,” he said.

Mali has been in turmoil since a 2012 uprising prompted soldiers to overthrow the country’s president. The power vacuum that was created led to an Islamic insurgency and a French-led war that ousted the jihadists from power in 2013.

However, insurgents remain active and the U.N. has seen its multinational peacekeeping force in the region suffer more than 150 fatalities since its mission began in 2013.

Francois Audet, who studies Canadian humanitarian policy and international relations at the Universite du Quebec a Montreal, said there are four million people in need of aid in the country, many of whom are inaccessible to civilian aid workers because it’s too dangerous.

The role of peacekeeping operations is to develop secure zones to permit civilians to reach those populations, he said.

Audet said the country has been made more dangerous in recent years with the arrival of armed factions in the months and years after the toppling of the Libyan regime in 2011.

“It’s a dangerous country for civilians and especially for western interests,” Audet said in a French-language interview. “So if you’re a development or aid organization, your access outside of the big cities like Bamako is extremely difficult, if not impossible.”

He said Canada’s entry into the conflict is “very late.”

“It’s not too late, but it’s very late,” he said. “And since (the Liberals took power), our allies have exhausted themselves, so we need a system of change where each country needs to take their part of the responsibilities.”

In November, Prime Minister Justin Trudeau pledged during a peacekeeping summit in Vancouver to offer six helicopters and two transport aircraft, plus their associated pilots and support personnel, as well as a 200-strong quick reaction force to the U.N.