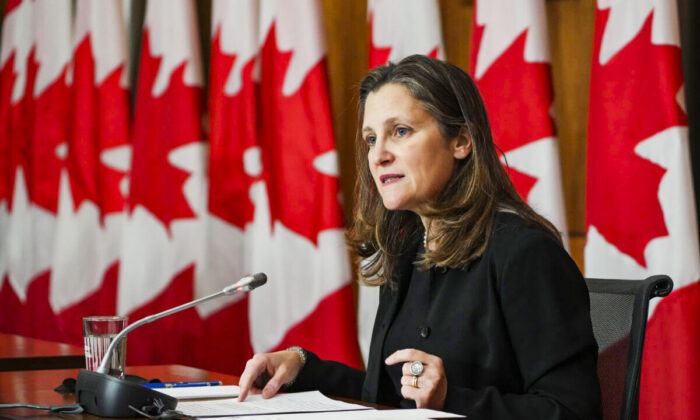 Freeland announced the measures at a press conference, shortly after Prime Minister Justin Trudeau declared a state of emergency due to the ongoing protests against COVID-19 mandates and restrictions by truckers and their supporters.

The measure effectively broadens the scope of anti−money laundering rules in the country and directs banks to freeze accounts of entities involved in the protests as it looks to put an end to what it says are illegal blockades.

“The illegal blockades have highlighted the fact that crowdfunding platforms and some of the payment service providers they use are not fully captured under the Proceeds of Crime and Terrorist Financing Act,” said Freeland.

Freeland said that beginning Monday, all crowdfunding platforms and their payment service providers are required to register with the country’s national financial intelligence agency and report large and suspicious transactions.

Companies whose trucks are used in blockades will have their corporate accounts frozen and their insurance suspended, Freeland added.

It comes after GoFundMe on Feb. 4 said that it won’t be giving the CDN$10 million ($8 million) raised to support the truckers protesting COVID-19 mandates to the organizers anymore, saying it will instead work with the organizers to send the funds to “established charities verified by GoFundMe.”

“Following a review of relevant facts and multiple discussions with local law enforcement and city officials, this fundraiser is now in violation of our Terms of Service (Term 8, which prohibits the promotion of violence and harassment) and has been removed from the platform,” the fundraising platform said in a statement at the time.

GoFundMe added that it has “evidence from law enforcement that the previously peaceful demonstration has become an occupation, with police reports of violence and other unlawful activity.”

GoFundMe had earlier put a freeze in withdrawal of the funds as it undertook a review “to ensure it complies with our terms of service and applicable laws and regulations.”

Supporters then raised $900,000 in bitcoin to support the convoy, Business Insider reported.

The “Freedom Convoy” began as a protest against the federal government’s COVID-19 vaccine mandate for drivers crossing the U.S.–Canadian border, but became a large movement as many across Canada opposing various COVID-19 mandates and restrictions joined the protest.

Protesters have vowed to stay put until COVID-19 restrictions are lifted.

Trudeau on Monday became the first prime minister to invoke the Emergencies Act, which replaced the War Measures Act in 1988.

Omid Ghoreishi and The Canadian Press contributed to this report.