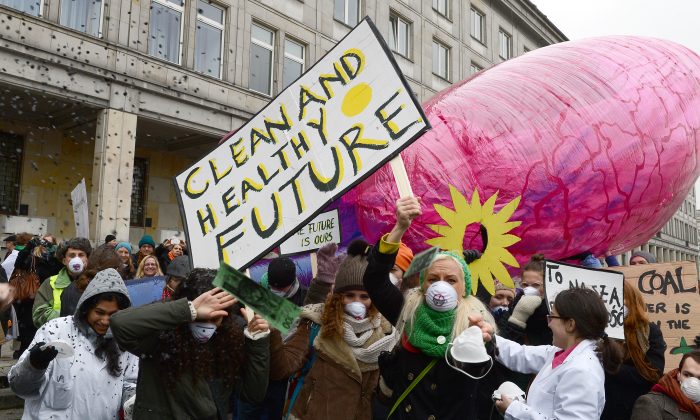 Young environmentalists from international organizations protest in front of the Polish Ministry of Economy in Warsaw, where the COP 19 climate summit is taking place, Nov. 18, 2013. Canada has placed last among wealthy countries in an OECD ranking for environmental protection. (Janek Skarzynski/AFP/Getty Images)
Canada

Canada has placed dead last among wealthy countries in an OECD ranking for environmental protection.

The annual ranking, released Monday by Washington-based Center for Global Development, assessed 27 of the world’s wealthiest nations on their “commitment to development index” or CDI, in several areas that impact the world’s poor.

Canada ranked 13th overall, but fell to last place in the area of environmental protection—the only country whose environment policies have deteriorated since the index began in 2003.

“The United States and Canada are the only CDI countries that are not party to the Kyoto Protocol, the most serious international effort yet to deal with climate change,” said the report.

“That gap, along with high greenhouse gas emissions and low gas taxes, puts Canada at the bottom.”

Rising fossil fuel production was also to blame for Canada’s poor standing, said a press release put out by the Center for Global Development.

The countries ranked were all members of an OECD group involved in aid and development measures, which did not include countries such as Russia, China, and India.

Denmark placed first on the list overall, followed by Sweden and Norway, with Japan and South Korea coming in last.

“Canada is taking a leadership role in international climate change efforts by focusing on delivering significant environmental and economic benefits for all Canadians,” said Aglukkaq in a statement.

“The Government of Canada is committed to establishing a fair and effective climate change agreement that includes commitments by all major emitters. Our actions have resulted in real progress through avenues such as UNFCCC, Arctic Council, and Climate and Clean Air Coalition.”

Over the past 12 months, the public’s confidence in government as the lead actor in addressing climate change declined sharply to 53 percent (down six points) said the survey, released by the Environics Institute for Survey Research in partnership with the David Suzuki Foundation.

“Canadians have for decades looked to their governments for leadership on addressing climate change and other environmental problems,” said Keith Neuman, executive director of the Environics Institute.

“This latest survey shows a noticeable drop in the public’s confidence in governments’ capacity to play this role, and this may well be because citizens haven’t seen any evidence of leadership, especially at the federal level.”

The survey examined public opinion on climate change as part of the Focus Canada public opinion research program. It is based on telephone interviews conducted with 2,003 Canadians between October 1 and 17.